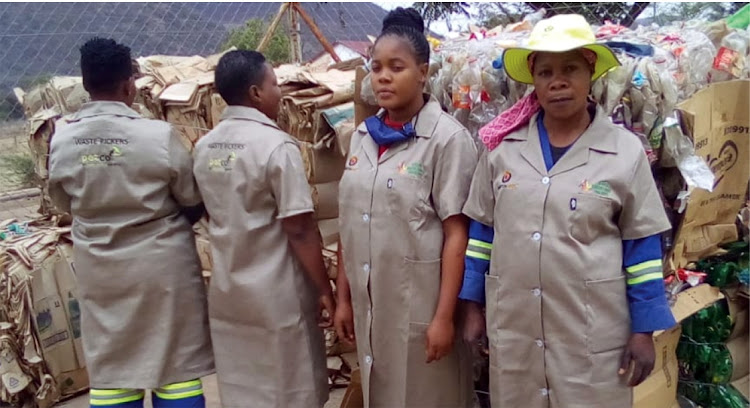 Waste pickers in Barberton will benefit from a deal signed between Africa Green Earth and Barberton Mines
Image: VUKUZENZELE

A non-profit organisation Africa Green Earth will soon start with a waste recovery and green energy deal with Barberton Mines in Mpumalanga.

The deal, which was signed in October last year, will see the organisation use plastic and other recyclable materials to produce oil and fuel that will be used by three of the four mines that fall under the Barberton Mines group.

“We’ve been separating waste at source for rural communities since 2013 and using recycled materials to manufacture clothes, artwork and other valuable materials.

“In 2019, we started negotiating with the three mines to collect waste from their premises. We will then mix it with the other waste materials collected from communities to make the oil, which will be sold back to the mines,” he says.

Magongo says the deal includes the Consort Mine, Sheba Mine, Fairview Mine, the PET Recycling Company and Mbombela municipality.

The process of turning waste products into fuel and oil, known as pyrolysis, sees high heat, pressure and water used to break down plastic and convert it into oil. Most plastics are originally made from oil, so the process converts them to their original form.

While the lockdown imposed as a result of the coronavirus pandemic delayed the project, it is now back on track.

The Barberton Mines manager for community support, Norman Hartman, said the deal is still in the pilot stage.

Magongo says the next phase will be to implement the system that converts waste to paraffin, diesel, power and electricity.

“This phase will produce about 12 permanent jobs and create a sustainable environment for local economic growth for waste pickers at Barberton landfills and for street waste traders.

“This can be a cost-saving exercise for the mines, as the fuel is cheaper than ordinary fuel,” he says.

Magongo says the deal is one of the NPO’s biggest accomplishments.

“Not many rural buy-back centres have a job creation initiative towards energy-efficient green production,” he says.

From petrol station cashier to owner

Khumbu Shelembe’s had an interesting journey from punching the till at a Durban Caltex station to owning an operation that sells almost 10,000 litres ...
SebenzaLIVE
1 year ago

NPOwer, a first-of-its kind mental health support programme and 24-hour toll-free helpline for non-profit organisations (NPOs), has been launched by ...
SebenzaLIVE
9 months ago

A township-based NPO is spreading peace and hope through its empowerment programmes.
SebenzaLIVE
1 year ago
Next Article