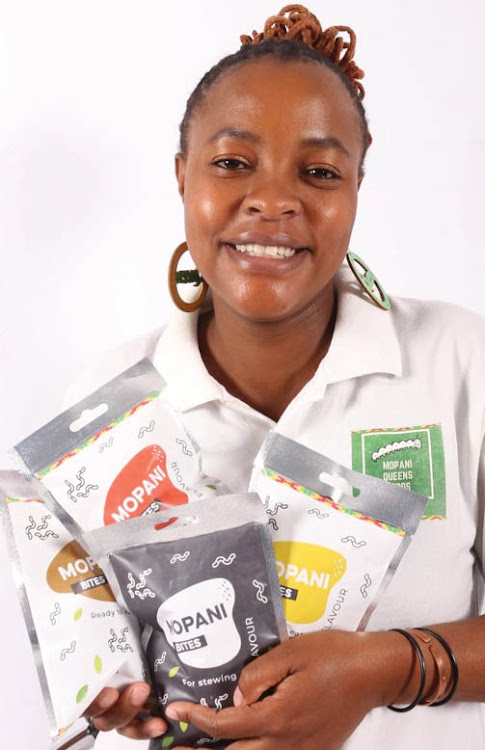 When Phuti Kabasa (36) decided to add flavour to the mopani worms she was selling, she found a recipe for business success.

In 2018, Kabasa needed to supplement the income of her household in Pretoria West. She found herself selling mopani worms and this is how her business, Mopani Queens began.

But she went a step further by adding a range of flavours to her mopane worms, resulting in a delicious snack that is a favourite among her customers.

“I started experimenting with flavours. I shopped around for sauces and drying technologies. I wanted to make mopane worms more interesting and accessible for people who do not know how to cook them,” she explains.

Kabasa ended up with three flavours, - peri-peri, barbeque and chutney.

She says the flavoured mopani worms offer the same nutrition as the traditional ones. “Traditionally, mopani worms are served with pap as a meal. My business is modernising this food by turning it into a snack,” she explains.

Kabasa has figured out her target market well. “While I sell to everyone, I mostly target customers looking for alternative sources of protein found in indigenous foods.”

She also services nutrition conscious people, especially sports people. “Mopani worms are rich in protein and are affordable,” she says.

Kabasa started producing and packaging Mopani Queens in her family kitchen. She recently bought a wendy house which is now her workstation.

Like many other businesses, when Mopani Queens started sales were slow. However, that changed when Kabasa started marketing the busines online and on social media.

Kabasa has even bigger dreams for the business. She plans to sell other natural foods, such as insects. She strongly believes that in the future insects will be a more viable source of protein than traditional meat.

One Monday morning in 2019, unemployed Kholofelo Masha packed his bags, left his Mpumalanga home and headed to Johannesburg for greener pastures.
SebenzaLIVE
1 month ago

Masello Mokhoro has been selected as one of 26 African entrepreneurs to be incubated by the Anzisha Prize.
SebenzaLIVE
1 month ago

Booysen’s slip past the pedicure

With no education in cosmetology or somatology, Shantelle Booysen used her love for pedicures to create products that are now being exported to 34 ...
SebenzaLIVE
1 month ago
Next Article