Food would normally go to waste 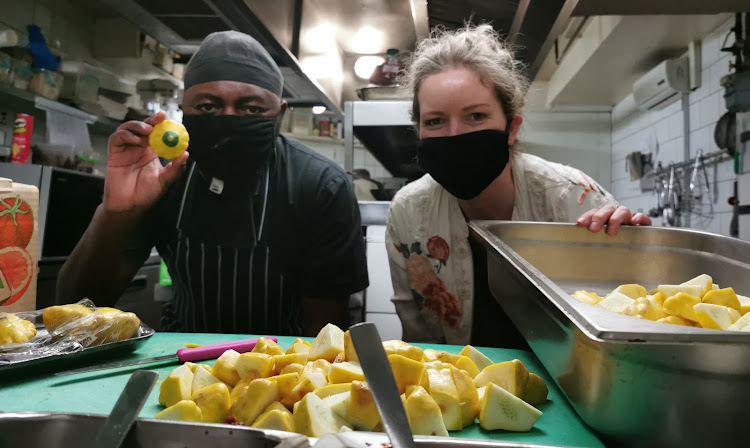 Joburg restaurant Perron is one of the Chefs with Compassion hubs where hard-working chefs transform rescued produce into nutritious meals for those in need.
Image: Supplied

A team of chefs are ensuring that no-one goes hungry by forming Chefs with Compassion, a nonprofit organisation, comprising individuals, companies and organisations that rescue surplus food that normally goes to waste.

Chefs with Compassion donates the food to kitchens to be cooked and distributed to the hungry.

“It’s a shocking fact that 10-million tonnes of food goes to waste every year in South Africa. That means one-third of all the food produced is waste – that is more than enough to feed the 19-million people going hungry across the country,” said Chefs with Compassion general manager Marion Tanzer.

The food rescued from the Joburg Produce Market, local farmers, food manufacturers, wholesalers and retailers is taken to the share house in City Deep for sorting. This is to ensure that good quality food reaches the Chefs with Compassion kitchen.

Produce unfit for human consumption goes to composting and pig farmers. After the food has been collected, it is prepared by the cooks, caterers and chefs from the 29 beneficiary organisations.

“The third and final part of our mission is to ensure the meals reach those most in need, through our approved beneficiary organisations. “Our greatest wish is to alleviate the hunger and suffering in South Africa,” said Tanzer.

Themba Mbatha-Chalumbira of One Moment Foundation was delighted to be one of the beneficiaries to receive food from Chefs with Compassion.

“We received large donations of vegetables and utensils from Chefs with Compassion, which helped us maintain our soup kitchen that feeds over 200 homeless people daily, including children from informal settlements in Berea, Johannesburg.”

Restaurant owner Thandi Dyantjie, from Germiston on the East Rand, was uneasy seeing people go without food at the start of the lockdown.

“I saw people struggling. They could not get food. I chose to make a difference and started a soup kitchen, with help from my staff, family and Chefs with Compassion,” she said.

Tanzer invited companies in the agricultural, manufacturing, distribution and retail industries to share their surplus produce with Chefs with Compassion.

To register as a kitchen or a beneficiary, visit cwc.org.za to complete a form.

Tebogo Sebambo is part of a growing cohort of emerging farmers who have joined an online platform to share their produce with the needy to fight ...
News
1 month ago

A group of elderly farmers from three Limpopo local municipalities are learning new practical farming skills, thanks to the Farmer Field School ...
SebenzaLIVE
7 months ago

Commitment made to reduce food waste

The Consumer Goods Council of SA on Tuesday launched the SA Food Loss and Waste Voluntary Agreement which commits food manufacturers and retailers to ...
News
1 year ago
Next Article