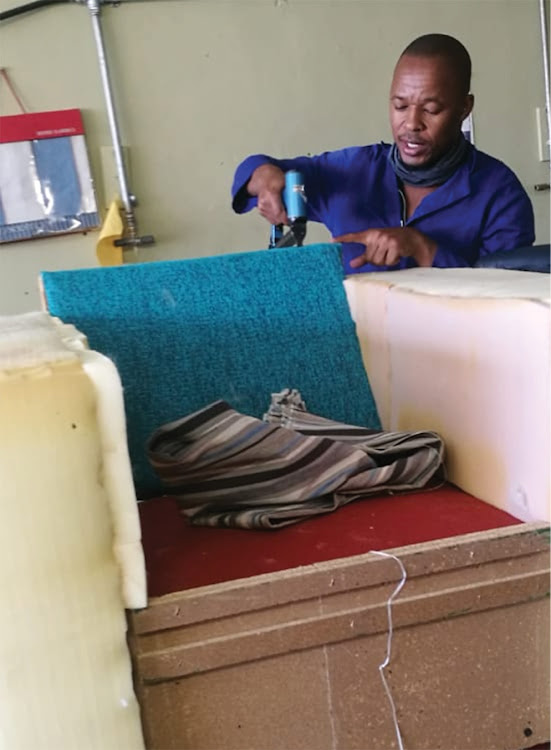 Josua Juwele has not let a pandemic or being homeless stand in the way of this dreams.
Image: Vukuzenzele

Josua Juwele, 21, was looking for a job when the coronavirus pandemic hit SA last year.

He landed up homeless on the streets of Johannesburg. But thanks to the help offered by the Gauteng department of social development and the Small Enterprise Development Agency (Seda), Juwele now fixes sofas for a living.

It all started in March last year, when President Cyril Ramaphosa placed the country under lockdown.

Juwele, who is originally from Upington in the Northern Cape, had no option but to move out of his friend’s Randburg home to a homeless shelter as he had no money.

“I lived with my friend since 2018, trying to find a job. He assisted me with money for transport for interviews, but when the country was put on lockdown, I could not impose on him any more,” he said.

Juwele then heard an announcement from the department on the radio that homeless people in Gauteng would be offered shelter during the lockdown.

“I stayed at a shelter in Bezuidenhout Valley and moved to Hillbrow in mid-September,” he said.

As part of an exit plan for those at the shelters, Juwele enrolled in the five-day entrepreneurship training programme run by the department and Seda. He was taught how to draw up a business plan and learnt about public relations and customer care.

Juwele later enrolled in an upholstery course that taught him to fix sofas and now plans to register a business. “I am going to start an upholstery shop,” he said.

With money he makes from the shop, Juwele wants to complete his psychology studies at Unisa.

“I want to be a social worker. I have witnessed how proactive and directly involved they are with people at shelters.”

– This story first appeared in GCIS-Vukuzenzele

Peter Nkosi dropped out of medical school because he wanted to pursue a career in mechanical engineering but when that did not happen, he built a ...
News
3 weeks ago

The Western Cape Honeybush Tea Cooperative is putting SA on the global map as a top tea producer.
SebenzaLIVE
1 month ago

Isaac Boshomane, the owner of Kgabo Cars in Gauteng, opened his business to provide opportunities to youth interested in car mechanics.
SebenzaLIVE
1 month ago
Next Article