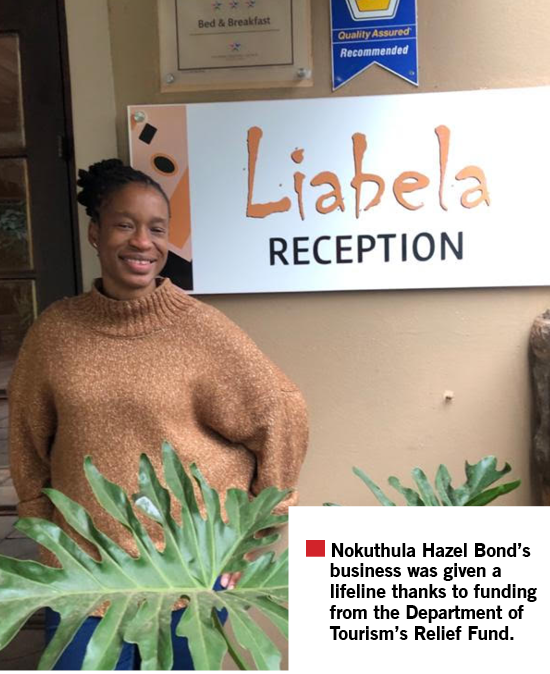 Nokuthula Hazel Bond’s business was given a lifeline thanks to funding from the Department of Tourism’s Relief Fund.
Image: Supplied.

As the South African tourism sector recovers from months of difficulty, Nokuthula Hazel Bond (41) is grateful that her business survived, thanks to the R50 000 she received from the Department of Tourism’s Relief Fund.

Bond is the owner of Liapolis Accommodation and Leisure, which owns Liabela Bed and Breakfast in Pinetown. The money was put towards operational costs, including the salaries of her four permanent employees. She also provides part-time jobs to two locals.

Now that the country is reopening for business, Bond has been doing aggressive marketing to reach business travellers, which is her target audience.

“We are slowly starting to see the market returning. During Tourism Month, we are promoting the province as a destination of choice,” she says.

She says the safety of her guests and staff members remain a priority and she has implemented a number of coronavirus health and safety measures, including deep cleaning the establishment before guests arrive and when they leave and disinfecting areas that are often touched. On arrival, guests and staff members’ hands are sanitised and their temperatures are taken. The wearing of masks is also mandatory.

The business was founded in her family home in 2006, but officially opened its doors in February 2007. Bond says her main motivation was to build a legacy for her children and to gain financial freedom.

“Part of our home was extended to add four guestrooms. We had to extend our bond for start-up capital. Even though my skills and knowledge of the industry were limited, I was prepared to learn. I was also motivated to build something from scratch with limited resources,” she explains.

Bond received non-financial assistance from the Small Enterprise Development Agency in eThekwini, Tourism KwaZulu-Natal and the Department of Economic Development and Tourism.

The mother of three says her childhood, in KwaMashu in the north of Durban, shaped the woman she is today.

“I became responsible from a young age as both my parents worked hard to make ends meet. My upbringing instilled in me the value of hard work and resilience. I have a Bachelor of Social Science degree from the University of KwaZulu-Natal, which took me longer to complete as I ran out of funds and had to work to finance the rest of my studies,” she says.

She has learned over the years that there will always be challenges in the business environment, as there are in life, and says if you want to succeed, you have to be able to adapt.

From scrubs to ice cream scoops

Kristen Buttress exchanged her scrubs for an ice cream scoop.
SebenzaLIVE
11 months ago

When young farmer Ncumisa Mkabile recently harvested her first batch of spinach on a piece of land in Khayelitsha, it was sold by lunchtime.
SebenzaLIVE
1 year ago
Next Article