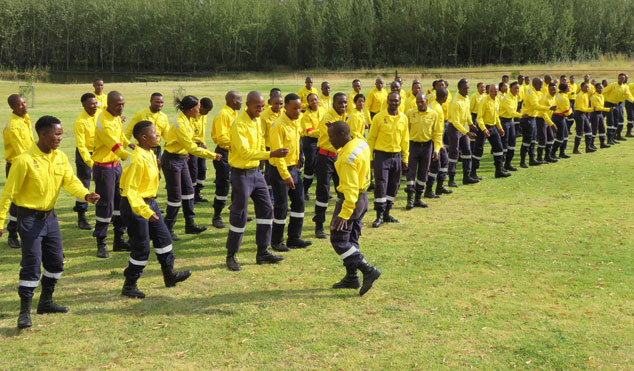 WOF employs over 5 000 young men and women from disadvantaged communities around South Africa, training them as firefighters.

By gaining work experience and skills, many of these youth go on to become fully employed in various fields.

Formerly a WOF employee, Hilda Ditshwele is now living her dream of being a police officer. She joined the WOF EPWP in 2012 and began gaining vital skills that she would have never previously had an opportunity to learn.

After five years at WOF, Ditshwele heard that the South African Police Service (SAPS) was recruiting new police officers. She decided to apply.

“I became confident that I can achieve anything in life. The SAPS was impressed with my fitness and I was immediately recruited to go to training college,” Ditshwele said.

Today, she is a proud police constable who plans to study criminology and forensic science. Other WOF participants are also starting promising new careers, thanks to the programme.

Abelo Duna joined WOF in 2011, and his hard work saw him quickly being promoted to team leader.

“I had to work hard and prove that I deserved to be in a leadership position,” said Duna.

He decided to use his monthly stipend to further his college education and in 2015, he passed an online occupational health and safety management course with Oxbridge Academy.

He went on to enrol for a National Diploma in Safety Management at University of South Africa in December 2018.

A month later, he was employed as WOF’s occupational health and safety administrator for Limpopo.

Here's how to create a winning CV

Most job-seekers struggle to put a good curriculum vitae (CV) or resume together, and this sometimes lessens their chances of getting shortlisted and ...
SebenzaLIVE
2 years ago

Phumlani Kango has earned his right stripes as a go-to voice in sexual and mental health.
SebenzaLIVE
2 years ago
Next Article