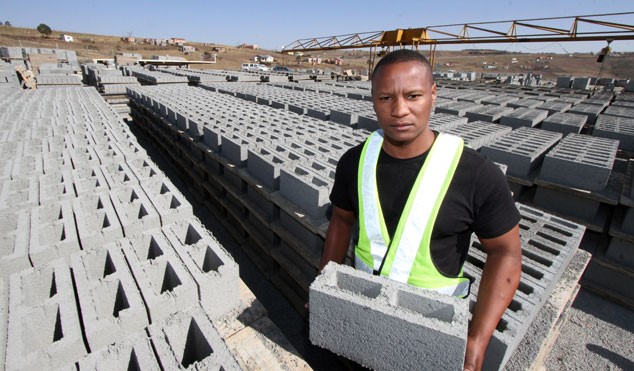 IncaPeace Trading, located at a quarry site on the R61 between Mthatha and Libode, supplies hardware stores in Mthatha, Libode and Qumbu.

Peti gained experience in the building industry while working as a manager at Build It in Qumbu in the early 2000s and later working at a quarry that sold raw materials. Responding to market needs, he registered IncaPeace Trading in 2013. It started operating in 2015.

Peti (35) said the company started small, producing only 3 000 blocks per day with eight employees but has grown over the past two years. He plans to expand his business and product range even further and to create more jobs.

“About 94 permanent jobs will be created as we will create a double shift and acquire a second machine. This will increase our production and targets.”

His business provides training opportunities and jobs to locals. “We are committed to education development of the local people and as a result, we award bursaries to assist in the education of staff members’ children,” he said.

Raymond Motadi, better known as Mon D the Gay Superhero, is slowly making a name for himself in the entertainment industry. He is currently the host ...
SebenzaLIVE
3 years ago

It is not only difficult but quite daunting to leave a job that pays you well but does not satisfy you.
SebenzaLIVE
3 years ago
Next Article