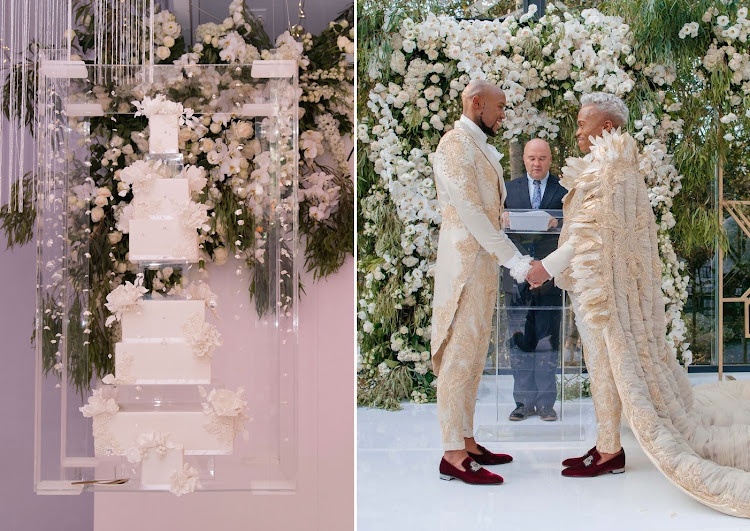 Grooms Somizi Mhlongo and Mohale Motaung, and the dreamy 'floating' cake they had at their white wedding reception.
Image: Showmax

If the hit Showmax series about Somizi Mhlongo and Mohale Motaung’s nuptials has taught us anything, it’s that nothing is too extravagant for this couple when it comes to celebrating their love. After all, why have one wedding cake when you could have four?

Kelly Jayne Finlayson of Kelly Jayne’s Cake Boutique shared some fun facts about the edible masterpieces she created for the grooms’ traditional and white weddings.

Mhlongo said it was his hubby who made the most outrageous requests on the cake front: apparently Motaung wanted one that was a whopping 30 tiers tall.

This was scaled down to a still huge 10 tiers for their traditional African-themed wedding reception. “Each tier was a different flavour,” says Finlayson. “Some of the flavours they chose were creme brûlée, death by chocolate, salted caramel and whisky, and Amarula.”

This 10-tier cake wasn’t the only impressive piece of baking Finlayson’s team did for Somhale's traditional wedding. It was flanked by a pair of five-tier chandelier cakes, so called because they hung, seemingly upside-down, from the ceiling. These “upside-down cakes” were Mhlongo’s idea, revealed Finlayson. 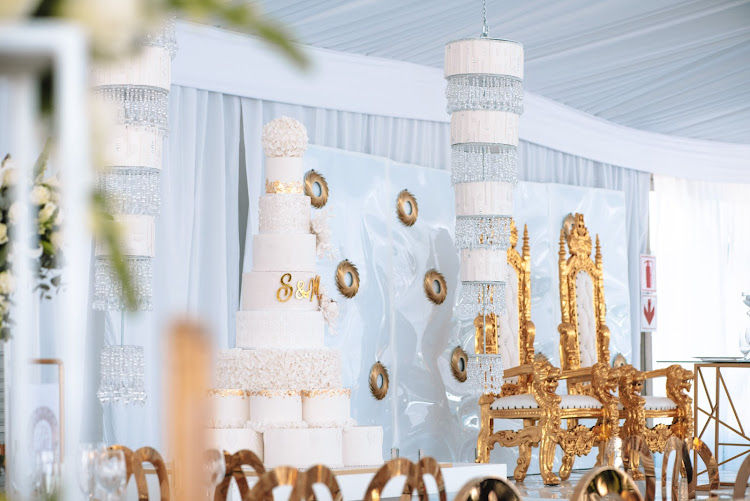 A trio of cakes formed an impressive backdrop to the festivities at Somhale's traditional Africa-themed wedding reception.
Image: Showmax

The Idols SA judge also requested a cake that looked as if it was “floating in the air” for the couple’s white wedding reception. To fulfil his vision, Finlayson’s team created a nine-tier cake and suspended it from the ceiling in a clear Perspex box.

ONLY THE GROOMS ATE THE CAKE AT THEIR WHITE WEDDING

Well, sort of. As you can imagine it's tricky to serve a cake that’s hanging from the ceiling and encased in a box. So after the newlyweds had cut the cake that was on display, their guests were served slices from another one that had been stashed in the kitchen.

• Somizi & Mohale: The Union is available on Showmax.

This article first appeared in the Sunday Times Lifestyle.

The dress code was all white with red bottoms.
S Mag
2 years ago

Some of the best & worst dressed celebs at Somizi's white wedding

SA's a country with casual vibes, so it's not unheard of to see grooms wearing sneakers or even flip flops on their Big Day. But for their white ...
S Mag
2 years ago
Next Article