Thembi Seete opens up about motherhood 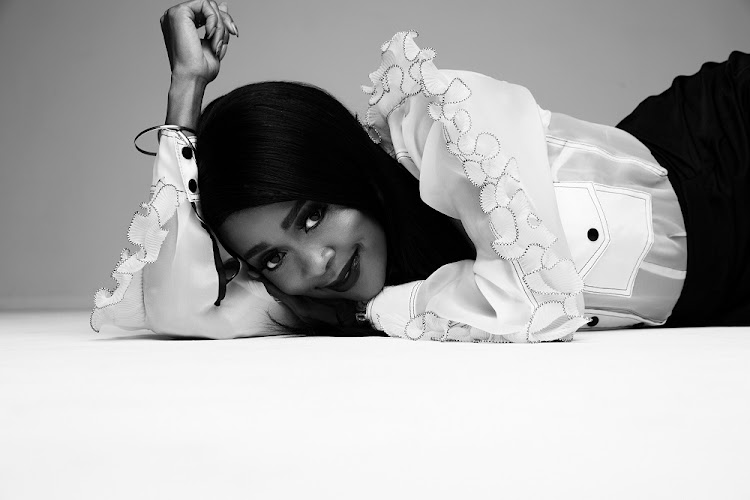 When I was in my early teens, my older, (and then cooler) sister took me with her to a bash at Village Walk in Durban. She knew the promoters, so we got to sit in the VIP section, with a premium view, which is how I first saw the phenom that was Boom Shaka live onstage.

I was mesmerised, as was the rest of the country, by this eclectic outfit that had brought sexy back with their ragga and pop-infused kwaito. The group inspired an entire generation, with its bold statement of pro-Africanism, and the two female members of the group sporting trademark bum-length box braids, sexy outfits (mostly a uniform of pleather hot pants and crop tops), and impractically long nails.

There was no doubt that Junior Sokhela, Theo Nhlengethwa, Lebo Mathosa, and one Thembi Seete had started a revolution: not only in how the youth expressed themselves, but also how they looked. Like my peers, I was in awe — as I am today when my phone registers a missed call from Miss Seete.  She is calling to let me know she is running late for our meeting.

At 41, Thembi, has managed to do what others in the local entertainment industry have failed to: survive. Tay Tay, as she introduced herself to her adoring fans as back in the mid-90s, now boasts a career spanning almost three decades. She has weathered the storms, including Boom Shaka’s unceremonious break up, and reinvented herself. From rapper and dancer, she has become an actress, TV presenter, brand ambassador, businesswoman, and most recently, at 40, a mother.

When Thembi eventually arrives for our interview, she bursts into Azuri, the boutique beauty salon she co-owns with two friends. She’s dressed in a trendy graphic white top, dark-blue ripped jeans, and white sneakers. Her trademark long nails are a shade of purple.  “Hello, hello everyone,” she says to a room of people whose attention has suddenly shifted solely to her. 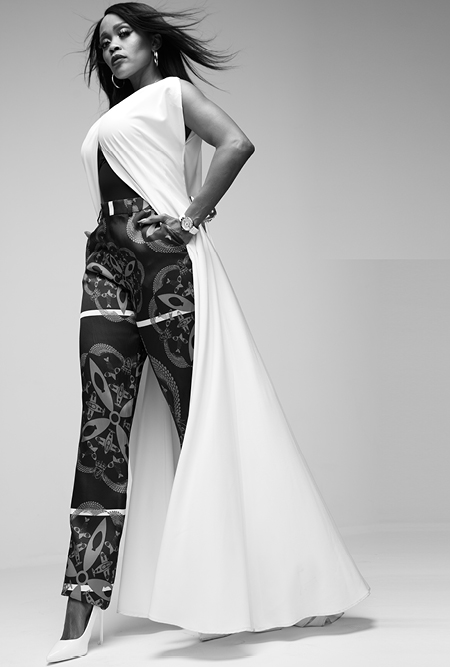 After greeting staff and customers she turns her full attention to me, suggesting we go chat in the garden, which is where we sit as one of the country’s entertainment icons opens up to me about her newest and seemingly favourite role yet: that of being a mother. “Being a mom has changed me in the most amazing way. I think I’m much happier, man. I’m full,” she says emphasising the point by pressing into her gut.

“I feel like that empty space… searching for something, you don’t even know what you are searching for, it’s gone, you know?”  She says “you know” a lot. “I feel like that space has been filled up. I feel so content, so relaxed. So happy, as if I have a purpose in life.”  Long pause. “My favourite part is being introduced to a different person every single day,” Thembi says of her child, who was born three months ago.  She is so petite that there are no signs she has recently given birth.  She last went to gym a year and a half ago. “Every single day is sort of like...and then? What is that? Where is this coming from? Different behaviour, the way they do things,” she enthuses about her son, whose arrival was confirmed to fans on Mother’s Day when she posted a message on Instagram.  Other than that, Thembi has been mum about her first born.

“My obsession is just, God, please can I be present and not miss out on the most important things,” Thembi says. She says she knew immediately when she fell pregnant, something she puts down to age and knowing her body. “It’s not like when you’re still young; it’s not like you’re still experiencing things that you’re not familiar with,” she says, laughing.

The Rhythm City actress’s pregnancy was widely speculated about, sending the rumour mill into overdrive.  She does not even let me finish my statement that she kept her pregnancy secret. “Not secret, private,” she declares defiantly. “People knew. I wasn’t hiding it.  I just really wanted to... I wanted that space to belong to me only. I’ve shared a lot in my life for a very long time. I think the entertainment industry is such a lonely space, and if you share too much, you end up with nothing, you know.”

What is her son’s name, I ask. Thembi turns serious, brows furrowing. She pauses for a few heavy seconds. “Eish, I don’t know if I...” she says trailing off, then just as quickly as she stopped, she starts again. “It’s Dakalo, she says spelling it out.” She’s smiling again at the mere mention of his name, which means happiness in tshiVenda. “It’s a beautiful name. I’m happy. I have so much joy, so much peace.”

For someone with such a big personality, Thembi is fairly soft-spoken, except when she speaks about the old days. “There are a lot of things I did when I was younger and I miss them. I loved the dancer, the crazy, the ragga, the (growling sound),” she says, laughing. “I’m struggling to let go of that person! I’m struggling to let go of the turn-up girl,” she says, clapping her hands with each word while semi-dancing on her chair. “I don’t think I will let go of that person, not any time soon. That turn-up girl makes me happy. That’s the girl who helps me age gracefully, staying young. I don’t know who writes these rules (to ageing). Maybe there’s a book somewhere that exists. People put themselves under pressure that when you’re a certain age: you have to look a certain way; you have to dress a certain way-hhayi maan.” 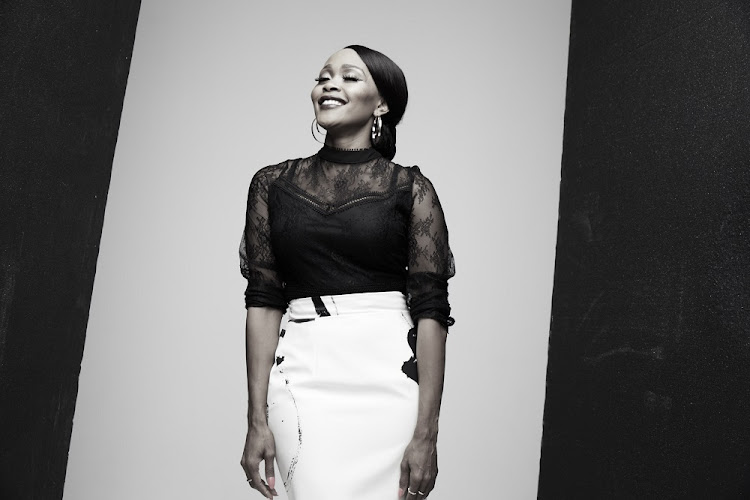 She doesn’t understand what the fuss is about how she is ageing. “I look at myself and I’m like: I’m not the same. There’s no way you’d stay the same or look the same forever. I don’t know, maybe it comes with just being comfortable, being yourself.” Either way, her fountain of youth has given Thembi another big moment this year: becoming the face of beauty-brand Pond’s Age Miracle. She prayed for the opportunity.  “You sort of like ask God, ‘Why am I not the face of something?’ Because I’ve been around; I’ve kept myself well; I take care of myself.” When she was selected by the brand, Thembi says she was “really excited.  That’s where my beauty regime started (when I was younger) so it’s like coming full circle.”

Thembi has a strange way of making you feel as if you have known her forever.  Although, since she started her career at 14, we kind of have. She laughs freely, gesticulates wildly, holds direct eye contact confidently, and smiles often. She shares how how she can still break it down “and trust me, it’s worse now. I have hips, I have a butt (which came after giving birth). It turns me on: I’m like, 'girl, is that you?'!”

Her appeal is in her honesty. She is honest about having lost everything at some point, including herself, as she scrambled to hold on to the fame she had come to enjoy as part of a group. She has been open about the love she shared with former partner, musical artist, Bo Denimm with whom she was together for about a decade.

I know my worth. I know I’ve worked hard. I’m not scared to say ngifuna lokhu and I want it like this, you know? I know God got me.

Does she consider herself an icon? “Hmm…..I think that’s how a lot of people see me.  They call me a legend which is really like, wow! It’s quite big. It’s such a big name. Am I doing that well?  Have I been that great, really? I don’t know, but I’m grateful that that’s how I’m perceived. I think I still have a long way to go, but it’s a great feeling when people give you that kind of respect and props.”

Ultimately, Thembi says she’s braver than when she was younger. “I know my worth. I know. I’ve worked hard. I’m not scared to say 'ngifuna lokhu and I want it like this', you know? I know God got me.”

Actually, people don’t know that, that part of the rap verse in It’s about Time was done by Lebo. She wrote that verse with Junior. On the recording it’s Lebo’s voice: you must watch the video.  It’s not me on that verse. So because I was the rapper in the group, and it was established, people thought, and still think that I’m the one that does that whole part. When Lebo comes, I don’t know what she is saying. I just laugh about it because people pick on me on Twitter.  People will ask me, "Thembi were the lyrics coming from God, or something?" I’m just tired of explaining. I just take it like, okay, it was that time, can we move on? I just thought, let me make peace with it: it’s fine.

This article first appeared in print in the Sowetan S Mag September 2018 edition.