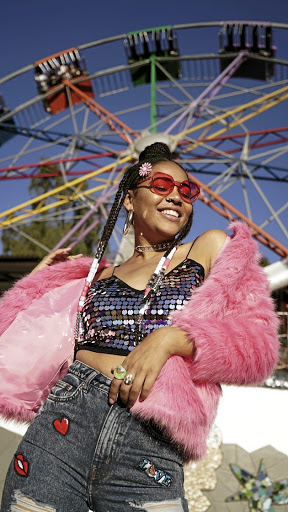 Rapper Sho Madjozi will set the stage alight at the Basha Uhuru Music Festival to take place at Constitution Hill this weekend. Now in its sixth year, the event showcases contemporary art, design, film and music and is touted as a celebration of young South African creatives.

We caught up with Madjozi, who spoke to us about her journey in music, love for Tsonga culture and who AKA should be dating:

I studied creative writing and one day I found myself broke on my dad's couch. Since the only thing I can do is write, it got to a point where I was like: "Am I going to be a ghost writer for a rap artist just because I can write rap?"

I love being a forceful carefree black girl. It's like a movement standing up against injustice and, yes, we must fight to be treated with more dignity.
But we must also live - and enjoy ourselves, enjoy our country and being who we are. I'm always showing off my culture.

I was in a studio where I was told: Don't rap in Tsonga, it's better if you rap in isiZulu. No one's going to buy or listen to your music and, if they do, it will only be in Limpopo".
And I said: "I can't be someone else.
Black people aren't just bare canvasses you can chop and change. That isn't who I am. How can I rap in someone else's language when making my music? And I was, like: I'd be very happy if I were a superstar in Limpopo." And we proved that person wrong!

I would love to collaborate with Sjava. We have this amazing friendship, and he is always giving me advice. I think he's iconic, but we've never done anything together.

The South African music industry needs more people. There's so much space, you know. The other day my friends and I were thinking about who are the big female artists out there. We were even trying to figure out who should AKA date now that he has broken up with Bonang.
It must be a Jay-Z- Beyoncé type of vibe because, after Bonang, who are you going to date, who are the big female stars? That space is still wide open. We could still have a superstar out there, especially on the women's side. I feel like there's still room for that.

In future I want to launch a fashion line and call it Young Fly Africa. And later on, when we're really big, I want it to be known as YFA.

DJ p.H has been making his upward trajectory in the South African deejaying scene over the past couple of years.
S Mag
4 years ago

Five minutes with soulistic’s artist Langa Mavuso who is pitted as the next big thing.
S Mag
4 years ago
Next Article