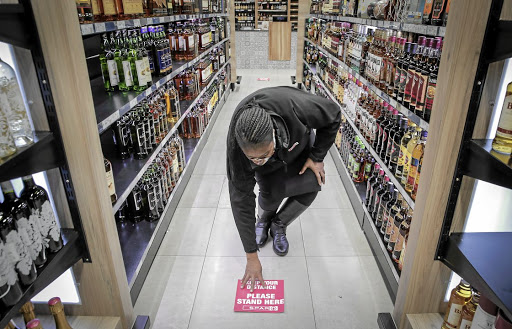 A staffer at Tops at Spar in Blackheath places social distancing stickers on the floor on May 20 preparing for the sale of alcohol on June 1. The ban was later reinstated. /Sebabatso Mosamo/Sunday Times

A government's actions must be seen to be reasonable and fair from the point of view of any law-abiding citizen.

Any responsible administration has to consider various perspectives and balance the need to minimise the economic damage, minimise the extent to which our rights are limited as required by the constitution, and help to save lives from the coronavirus. The reintroduction of the alcohol ban tests those limits.

This is important for the entire industry but more so when it comes to small business owners operating in the townships and rural areas. The two organisations that are most representative of this group, the Gauteng Liquor Forum and the Liquor Traders Association of South Africa have already expressed their opposition to the new ban.

They argue that the R18bn in lost sales and R3.4bn in excise taxes for the alcohol industry due to the original nine-week ban means these smaller establishments are already under significant pressure.

The loss in excise taxes in particular should be a source of worry for the government going forward. There does not seem to be any doubt as to whether an alcohol ban has the effect of promoting the black market.

While the industry has conceded government's point about the increased hospital admissions due to alcohol consumption, the fundamental point is that any blanket ban amounts to a punishment of the responsible, legal part of the industry and market.

Indeed, the World Health Organisation proposes a range of evidence-based measures for reducing alcohol consumption without recommending a ban.

The representatives of the alcohol industry have signalled their willingness to accept some of the WHO measures, such as setting to the allowed blood alcohol level to 0% while driving, and the regulation of hours of the day when alcohol may be sold.

While none of these measures are likely to reduce the black market supply, total supply would likely be reduced since the legal industry is preferred by consumers.

The black market for alcohol will not replace the legal market in the short to medium term, but there's a real danger of losing market share and consequently a permanent reduction in tax revenue from the industry.

Cogta minister Nkosazana Dlamini-Zuma did not take kindly to accusations by a DA MP that her focus in the fight against Covid-19 has been on "zol and ...
News
9 months ago

Similarly, announcing a ban without giving citizens who drink the chance to stock up has further violated the same contract.

To make matters worse, in the same speech announcing the ban, President Cyril Ramaphosa akso said SA is entering an expected peak in the number of Covid-19 infections.

This means the government knew the peak was coming as they relaxed the first alcohol ban. They knew about the impact of alcohol drinking on hospital admissions and trauma cases.

The president also said the case fatality rate, at 1.5%, was lower than expected yet the government decided to ban the sale of alcohol after lifting a previous ban.

These seemingly irrational actions can only undermine respect for the law.

*Dhlamini is a data scientist and researcher. He is also a policy fellow at the South African Institute of Race Relations, who believes that individual liberty is the only proven means to rescue countries from poverty

Here’s what South Africa’s pineapple industry knows for sure - when the government bans the sale and distribution of alcohol, the nation’s ...
News
9 months ago

The restaurant industry is pleading with the presidency to allow restaurants operating "beyond alcohol-related trauma hotspots” to sell alcohol to ...
News
9 months ago

Waitresses, restaurant managers and bartenders joined the Million Seats in the Street protest in Ebony Park on Wednesday to highlight the ...
News
9 months ago
Next Article