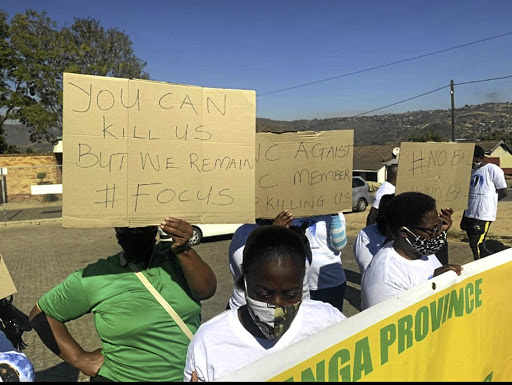 ANC members in Mpumalanga have lifted the lid on what they believe is hooliganism used by warring factions as they fight to have their own people elected to top positions in regions and eventually the provincial office.

This came to light ahead of a court appearance of five members accused of killing another ANC member during a party branch meeting that turned violent in KaBokweni, in Mbombela municipality, on March 15.

Prince Manzini, 45, was beaten to death and members believe there are senior officials who are "paying" people to disrupt ANC meetings and "beat up" those from rival factions.

The branch meeting to nominate candidates for the regional and provincial elective conference for ward 32 members is believed to have been attended by other people who were not supposed to be there, including three of the accused in the murder case.

Mpumalanga police have confirmed that they were looking for a sixth suspect in the case.

The group - Nhlanhla Casey Mabuza, 37, Sikhumbuzo Lukheleni, 33, and his brother Deon, 27, Boet-Boet Duncan, 35, and Given Ngomane, 31, - are expected to apply for bail today in the White River magistrate's court.

The Lukheleni brothers are from ward 33 and sources said they should have not have been in the ward 32 meeting.

Party members said fellow comrades are clashing over who should be the provincial chair of ANC - now a clear contest between acting chair Mandla Ndlovu and premier Refilwe Mtshweni-Tsipane.

Ndlovu and Mtshweni-Tsipane are vying for the position which was left vacant when former chairperson David Mabuza was elected deputy president of the ANC in December 2017.

Five ANC members arrested in connection with the murder of a fellow ANC member during a nomination meeting in Mpumalanga have been remanded in ...
News
2 years ago

The conference to elect the successor has been delayed many times, this time due to the outbreak of Covid-19. The position of deputy chair is also vacant after Violet Siwela became an MP.

Hlathi said they are expecting more arrests on the case.

"We can confirm that one person is on the run and we expect more (people) to be arrested as the investigation continues," said Hlathi.

Also in March, another man lost his life during an ANC meeting at ward 17, at Msukaligwa local municipality in Ermelo, in what is believed to be a leadership dispute between party members.

Sowetan can reveal that the Lukheleni siblings are sons of a well-known taxi boss.

A member who attended the KaBokweni meeting told Sowetan that only Mabuza and Ngomane belong to their branch and said they believed the Lukheleni brothers were "hired to disrupt the meeting".

"Everybody knows them here; they stay in the same township but not in ward 32. We got information that they were called to 'solve' people who disagree with Mabuza and Ngomane in the meeting," said the woman.

Another independent source from the ANC corroborated the information.

"What we know is that Manzini was targeted by these people but not only him, even ourselves if we happened to be in that meeting, we were going to be assaulted or maybe shot," said the source.

A week before Manzini was killed, another meeting was called off after a shot was fired. At the time, Ndlovu condemned the incident.

Manzini's brother, Joe Manzini, said their wish was for the accused to reveal the names of those behind the disruption that created the murder of his brother.

"We are happy that there are people arrested regarding my brother's death.

"We wish that they don't get bail before they tell us who was behind the killing because it's clear they were bought to kill my brother.

"The court is our hope now, we're asking for justice for our brother," said Joe.

Spokesperson for the ANC in the province, Sasekani Manzini (not related to the deceased), commended the police for the arrest of the five.

"As the ANC, we want to see anyone who has been found to have broken the law to be prosecuted. We are therefore happy that the law is taking its course on this matter involving the death of a member of the ANC.

"Even if people are members of the ANC, they have no right to kill anyone, hence we are saying the law must take its course," Sasekani Manzini said.

She said the party is still going to check on how the Lukheleni brothers found themselves in a meeting outside their ward.

"The ANC is going to find out if these three people from ward 33 are real members of the ANC and how did they happened to be in a meeting of the ANC in another ward."

The Mpumalanga health department has revealed that two of the three men arrested for the possession of a human placenta, knee and leg are its ...
News
2 years ago

Two Mpumalanga department of health officials arrested in possession of body parts have been suspended.  The officials, Jabulani Sam Mnguni, 45, ...
News
2 years ago

At least 20 health-care staff at two separate medical facilities in Mpumalanga have been infected by the coronavirus, the provincial health ...
News
2 years ago
Next Article