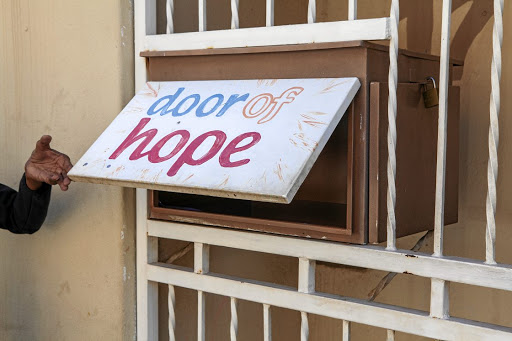 The Door of Hope Children's Mission organisation in Johannesburg which receives abandoned babies anticipate the number to increase in these times of uncertainty. / Gallo Images/Papi Morake

On a sunny day just before lockdown started, the man working our garden found a zipped, sports bag tucked halfway under the ivy plants on the pavement where he was gathering fallen leaves.

When we unzipped the bag, we found a newborn baby girl wrapped in a bed throw, blanket, and towel. She was breathing, lying on her side with the umbilical cord still attached. We called the police who arrived within minutes.

The policewoman called an ambulance. When the ambulance arrived, they cut the umbilical cord, wrapped her in a small space blanket and rushed off.

The case is real, and unfortunately, not an isolated incident. In SA, an estimated 3,500 babies are abandoned every year. The ages vary from newborn to one year.

Why do mothers abandon their babies? Where are the mothers' families? Where is the biological father?

Unintended pregnancies are not country specific. Research says 38% of pregnancies worldwide are unintended, with an estimated 16-million births occurring in girls younger than 15 years and up to 19 years of age.

Reasons may include insufficient reproductive healthcare, gender-based violence and rape, abuse, unsafe sex practices, sexual exploitation, and poverty. Unfortunately, many of these babies are abandoned.

The Covid-19 pandemic lockdown has led to even more challenges. Media reports mention an increase in abandoned babies and foetuses found in dustbins, dumps, and ditches.

Organisations anticipate an increase in abandoned babies because of uncertainties and added emotional, social, and economic stress. Several NGOs have already received babies. With the lockdown regulations and people forced to live together in small spaces, reports of GBV and rape are increasing. Will the number of unintended pregnancies also rise because of the Covid-19 lockdown?

There is a rise in the number of babies abandoned by their mothers since the lockdown began in March.
News
1 year ago

The reasons behind the decision to leave a baby are not clear, as it is nearly impossible to find the mothers. Poverty, unwanted pregnancy, teenage pregnancy, shame and lack of support are some possible reasons. Child abandonment is a criminal offence and a person can be charged.

The hours that followed finding the tiny baby were filled with hundreds of questions: Who was the mom? Why did she abandon the baby? Had she no other choice? Why did she wrap the baby, then zip the sports bag closed? Did she intend the baby to die, or hope that someone would find the baby in time?

Emotions jumped from one continuum to another. I felt angry that someone could abandon such a perfect little creature. I felt immensely sad that someone could be so desperate to do this. I felt so relieved that we found her while she was still alive.

The baby was found by the ivy plants. She was someone - she was Baby Ivy. Later the following week, at a hospital nearby, I went to the incubator and put my hand through to touch her. She was real. Even with the hospital identity band indicating 'Unknown', she had an identity.

A social worker placed the baby with a family with the aim of adoption. She is thriving. She is a beautiful and content baby.

Not all babies are as fortunate to be found alive. SA has abortion services, baby chutes where mothers can leave the babies, and several other options. Yet the number of abandonments remains high.

Thousands of young girls and women have unplanned and unwanted pregnancies. Baby homes and places of safety are filled to the brim and depend on donations and volunteers to care of these babies.

We cannot just condemn the person who abandons a baby and focus on the fact that it is a criminal offence. Society must acknowledge that the mothers and their abandoned babies exist. The department of social development, NGOs, civil society and individuals have the responsibility to respond to the act as one of possible despair.

WATCH | Adoptions on hold: Shelters struggle with space for babies abandoned during lockdown

Like many other shelters, Door of Hope is struggling to cope with the demand. The shelter recently welcomed two new babies, bringing the total at the ...
News
1 year ago

Door of Hope Children's Mission has welcomed a new baby to its shelter, as child abandonment increases during lockdown.
News
1 year ago
Next Article