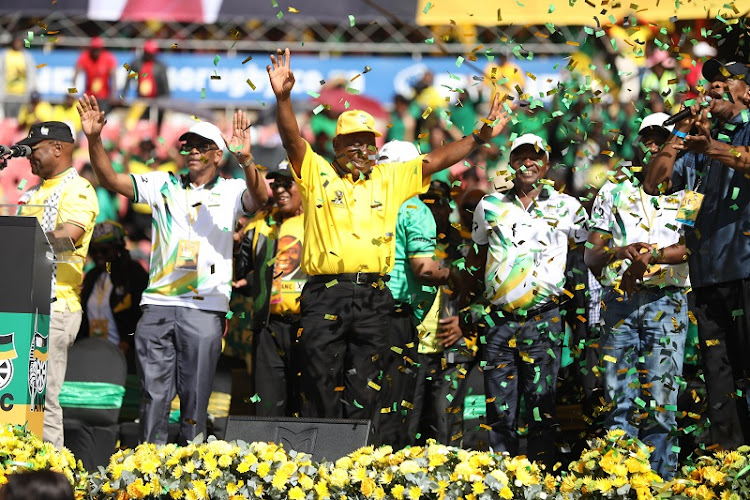 FILE IMAGE: President Cyril Ramaphosa and other ANC leaders sing and dance after Ramaphosa's keynote address at a packed Ellis Park stadium in Doornfontein, Johannesburg during the party's Siyanqoba Rally ahead of the national elections.
Image: Thulani Mbele

The elections have come and gone. Life is back to normal. But what do the results tell us, and what must we expect going forward?

A high-flying bird may not notice the new political picture emerging from our recent elections.

The ANC is still the majority party. The DA continues to be the second-largest party, while the EFF retains its third position.

While the gains or losses made by the three leading parties may appear insignificant, they portend something very serious for SA's future.

The first big change is that, for the first time since 1994, the ANC has performed below the 60% mark in a general election. The party is clearly going south.

In the immediate aftermath of the elections, the ANC must brace itself for a tumultuous time. The anti-Ramaphosa faction will use the results to attack him as a weak leader who has taken the ANC to an historic nadir.

The message of unity and renewal that Ramaphosa has been spreading will be undermined. The pro-Zuma gangsters and state capturers will be emboldened to fight back, thus rendering the party ungovernable.

Under such circumstances, no policy coherence can be expected from a government led by a divided ANC. Ramaphosa has only one option: dealing with the gangsters mercilessly. If he shows any sign of weakness, they will go for his head.

As president, Ramaphosa has the power to let criminal justice institutions do their work. He does not need to target anyone; he must simply signal to the police and the NPA to prioritise high-profile cases involving politicians.

As the IEC declares the elections free and fair, the African National Congress (ANC) breathes a sigh of relief after being able to retain its ...
News
3 years ago

The evidence at the Zondo commission and VBS is enough for the NPA to get all political gangsters, including those in the EFF, in jail. While ANC comrade-thugs run in and out of court, Ramaphosa should waste no time to consolidate his forces within the party. Should he not do it, he would be lucky to survive until the party's next elective conference.

Will Ramaphosa show courage? He has no history of doing so. Maybe he will surprise us.

The second big signal coming from last week's elections is the widening of racial polarisation in our country's politics.

Two extremist parties have made notable gains from the elections - the EFF got 10% of the national vote and the FF+ received 2.5%. The former represents black fundamentalism, while the FF+ embodies white separatism.

The black people who voted for the EFF are disgruntled with the ANC, which has been occupying a centrist position since 1994. That a growing number of black people prefer an ultra-leftist, black fundamentalist party is a move away from the ANC's politics of reconciliation.

DA leader Mmusi Maimane says he is not worried that the DA's failure to significantly increase its support in this year's elections will cost him is ...
News
3 years ago

On the other hand, the white people who have abandoned the DA for the FF+ also prefer to drift further away from reconciliation. They are not happy with the DA's experiment with the politics of inclusion.

The ANC and the DA have allowed space for the EFF and the FF+ to thrive. For its part, the ANC has failed for 25 years to build an economy that benefits the majority of black people. A growing number of blacks feel left out of the post-1994 project, and are therefore tempted to follow a populist political outfit that promises manna from heaven - even though we all know the promises are empty.

The DA has failed to become a truly South African party. It has not been able to convince the majority of black people that the party can act as their trusted tribune, while not alienating whites. As a result, both are unhappy with the DA.

What, then, is the main trend emerging from the elections? It is that the ANC and the DA will eventually disintegrate, thus leaving space for new, highly racialised politics to prevail.