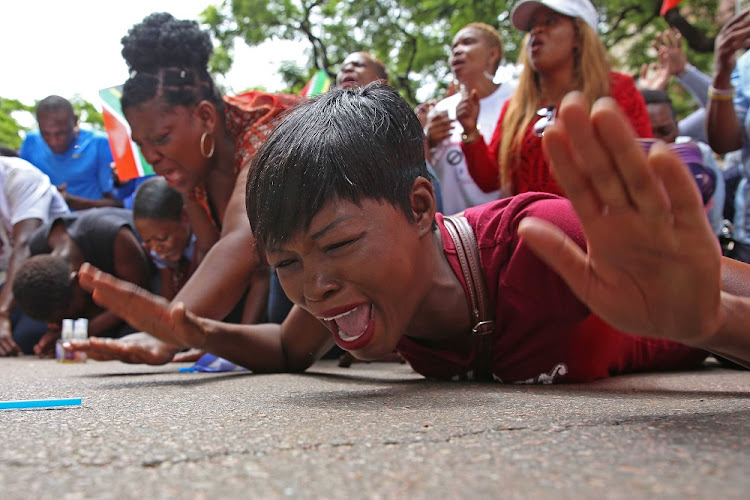 Followers of charismatic church leader Pastor Shepherd Bushiri, also known as Major 1, prayed and protested for his release as he and his wife appeared in court in connection with charges of fraud and money laundering yesterday.
Image: THAPELO MOREBUDI

As you read this piece, prophet Shepherd Bushiri (the Major 1) is appearing in the Pretoria Commercial Crimes Court with his wife, facing fraud and money laundering charges.

I fervently believe in the principle of presumption of innocence unless proven guilty. I don't think that in the 21st century we should subject any person, even our worst enemy, to the kangaroo court or to the court of public opinion.

I hold no brief for the Major 1. I don't know him from a bar of soap and neither have I met him but he deserves a fair trial. For me it is inconsequential that he is from Malawi. If he has committed a crime, he must face the law and its consequence.

Having said that I am deeply disturbed by his opulent lifestyle when there are no public records that I know of that he has been in any business transaction that is above board.

He is only 35 years old, but it is reported in the City Press that he owns a fleet of luxury cars which includes a Maserati, a Rolls Royce, an Austin Martin and a Mercedes -Benz G63.

He is alleged to have also bought his daughter a Maserati in December 2017 as a gift for her sixth birthday.

How does one explain this madness? What does a six-year-old child do with a Maserati?

The simple answer is from those that hero-worship him and I bet you that many of them will never see that kind of money in their lifetime.

I find the answer in Adam Smith's book, The Theory of Moral Sentiments, where he writes: "But vanity is always founded upon the belief of our being the subject of attention and approbation.

"The rich man glories in his riches, because he feels that they naturally throw upon him the attention of the world, and that mankind are disposed to go along with him in all the agreeable emotions with which the advantages of his situation so readily inspires him... the poor man, on the contrary, is ashamed of his poverty.

"He feels that it either places him out of the sight of mankind, or that if they take any notice of him, they have, however, scarce any fellow- feeling with the misery and distress which he suffered."

If you ask me, buying the Maserati is just an excuse to show off one's opulent lifestyle. I find it difficult to understand how his followers allow him and his wife to unashamedly exploit them in the name of God.

I am being naïve, in that this is what religion does to people. It instills fear, it demands subservience and it sadly creates zombies out of those who follow the one who supposedly represents God.

Most of his followers hero- worship him as if he is God. You then ask yourself, are they not supposed to look up to God as the author and the finisher of their faith as the scriptures implore them to? I find this irrational and nauseating.

Again, shouldn't we ask ourselves why to do right-thinking men and women blindly follow and hero-worship someone who is human. Sadly, black women are in the majority among those who will lay down their lives protecting prophets such as the Major 1.

They are also the ones who will use their last cent to ensure that his ministry is not only successful but grows in leaps and bounds. I will not take anything away from their agency, but it is the truth.

Unfortunately, it is the poorest of the poor who are exploited with gay abandon. I always ask myself in such situations, where are the black feminists?

Shouldn't it be their concern that poor black women are the most exploited in our country by such fly-by-night charlatans who profess to be prophets.

Shouldn't they be mobilising and galvanising black women against such unscientific promise of prosperity while they are being bankrupted?

I find their silence deafening. Surely, this should be part of their struggle for total economic emancipation of women. Black women, please wake up from your slumber.

Finally, all the so-called proponents of prosperity should stop exploiting the vulnerable in our society.

God is going to punish you!