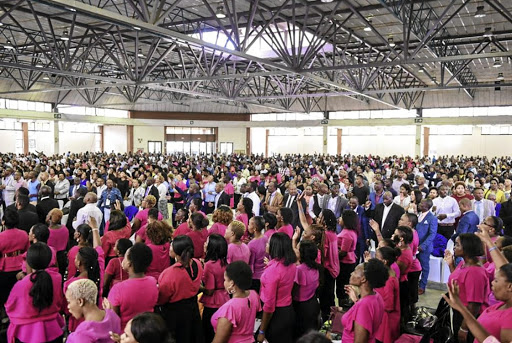 Hundreds of Enlightened Christian Gathering church worshippers at the Pretoria Events Centre break into song and dance during yesterday's service in Tshwane. / FACEBOOK

As controversial prophet Shepherd Bushiri prepared to appear in court today, scores of his followers rallied behind him during a church service yesterday.

The leader of Enlightened Christian Gathering church spent the weekend behind bars after he was nabbed by the Hawks in Rustenburg, North West, on Friday. He was arrested along with his wife Mary, 37.

He is accused of money laundering and fraud.

Unfazed by Bushiri's arrest, thousands of followers gathered at the Pretoria Events Centre yesterday morning for a service dubbed the grand opening service.

This was as reports emerged that authorities were gunning for Bushiri's assets, which include luxury cars and properties.

Shepherd Bushiri, leader of the Enlightened Christian Gathering Church, and his wife Mary Bushiri, appeared before the Pretoria Specialised Commercial Crimes Court on February 4 2019. The couple were arrested on February 1 2019 on fraud and money laundering charges.

Bushiri, 35, affectionately known to his followers as Major 1, is held in high regard in the church.

The church recently came under the spotlight after three people died during a stampede at a service in December.

On Friday, the CRL Rights Commission's report into the stampede found that he City of Tshwane did not give the event the attention it deserved.

The commission found that the church complied with the city bylaws but authorities failed to deploy traffic officers to the event. It recommended that the church "do everything in its power to find a suitable venue to accommodate its congregation".

At the service, that was delayed by two hours yesterday, it was song and dance for the followers.

Throughout the service, congregants kept chanting Bushiri's name, with some holding placards written "I will die for you Major 1" and "We love you Major 1".

Safety issues were highlighted at the beginning of the service. Congregants were told the service was delayed because the church had to follow all city bylaws and counted people as they entered the church.

They were made aware of exits and marshals who would assist in case of an emergency.

The CRL Rights Commission has found that the call by the SA National Civic Organisation (Sanco) for Pastor Shepherd Bushiri to leave the country is ...
News
3 years ago

Teachings were in line with the current developments in the church, with preachers encouraging followers not to be deterred.

When the time for contributions came, congregants dug deep into their pockets. Some placed up to R1,600 in cash in envelopes while others swiped R1,000 from bank cards on speed points provided.

A female congregant who did not want to be named vowed never to leave the church.

"The arrest of papa [Bushiri] is just an obstacle that will eventually pass.

"People are trying everything to bring him down but we'll stand by him.

"People are jealous of papa, they must go and open their own churches," she said.

Another congregant said she had been praying for Bushiri and the church.

"When I heard that he was arrested, I dedicated my prayers to him.

"I pray for him day and night and I believe that he will be released," she said.

He said the case concerned allegations of fraud, money laundering and the contravention of the Prevention of Organised Crime Act. "[The offences were] committed from 2015 in relation to exchange control regulations related to foreign currency in an amount of $1,147,200 [R13.96m]."