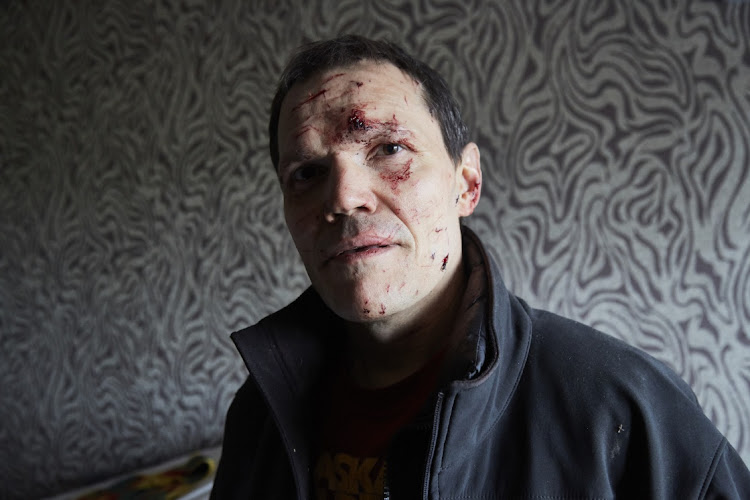 Vladimir collects belongings in his bedroom damaged by a missile on February 25, 2022 in Kyiv, Ukraine. Vladimir was wounded on his face by an exploding window.
Image: Pierre Crom

Russian forces launched co-ordinated missile and artillery attacks on Ukrainian cities on Saturday including the capital, Kyiv, where gunfire erupted near government buildings in the city centre, military officials and a Reuters witness said.

Ukrainian authorities have urged citizens to help defend Kyiv from advancing Russian forces who invaded on Thursday in the worst European security crisis in decades.

But even as the fighting grew more intense, the Russian and Ukrainian governments signalled an openness to negotiations, offering the first glimmer of hope for diplomacy since Russian President Vladimir Putin launched the invasion.

Ukrainian officials said Russian forces fired cruise missiles from the Black Sea at the cities of Sumy, Poltava and Mariupol and there was heavy fighting near the southern city of Mariupol.

President Volodymyr Zelenskiy, speaking in a video message from outside his Kyiv office, was defiant.

“We will not put down weapons, we will defend our state,” Zelenskiy said.

The air force command earlier reported heavy fighting near an air base at Vasylkiv southwest of the capital, which it said was under attack from Russian paratroopers.

It said one of its fighters had shot down a Russian transport plane. Reuters could not independently verify the claims.

The Interfax news agency said Russian forces had taken control of Kyiv's hydroelectric power plant but Mykhailo Podolyak, adviser to the president's office, said the situation in Kyiv and its outskirts was under control.

“There are cases of sabotage and reconnaissance groups working in the city, police and self-defence forces are working efficiently against them,” Podolyak said.

Kyiv residents were told by the defence ministry to make petrol bombs to repel the invaders.

Some families cowered in shelters and hundreds of thousands have left their homes to find safety, according to a UN aid official.

Ukraine said more than 1,000 Russian soldiers had been killed. Russia did not release casualty figures. Zelenskiy said late on Thursday that 137 soldiers and civilians been killed with hundreds wounded.

Ukrainians and Russians living in Cape Town gathered outside the Russian embassy in the Cape Town city centre to protest against Russia's invasion of ...
News
5 months ago

After weeks of warnings from Western leaders, Putin unleashed a three-pronged invasion of Ukraine from the north, east and south on Thursday, in an attack that threatened to upend Europe's post-Cold War order.

“I once again appeal to the military personnel of the armed forces of Ukraine: do not allow neo-Nazis and (Ukrainian radical nationalists) to use your children, wives and elders as human shields,” Putin said at a televised meeting with Russia's Security Council.

“Take power into your own hands.”

Putin has cited the need to “denazify” Ukraine's leadership as one of his main reasons for invasion, accusing it of genocide against Russian-speakers in eastern Ukraine. Kyiv and its Western allies dismiss the accusations as baseless propaganda.

Ukrainians voted overwhelmingly for independence at the fall of the Soviet Union and Kyiv hopes to join NATO and the EU — aspirations that infuriate Moscow.

Putin says Ukraine, a democratic nation of 44 million people, is an illegitimate state carved out of Russia, a view Ukrainians see as aimed at erasing their more than thousand-year history.

At least eight people have been killed and nine were wounded by the Russian shelling, an advisor to the Ukrainian Minister of Internal Affairs said ...
News
5 months ago

Western countries have announced a barrage of sanctions on Russia, including blacklisting its banks and banning technology exports. But they have stopped short of forcing it out of the SWIFT system for international bank payments.

The invasion triggered a flurry of credit rating moves on Friday, with S&P lowering Russia's rating to “junk” status, Moody's putting it on review for a downgrade to junk, and S&P and Fitch swiftly cutting Ukraine on default worries.

But amid the chaos of war came a ray of hope.

A spokesperson for Zelenskiy said Ukraine and Russia would consult in coming hours on a time and place for talks.

The Kremlin said earlier it offered to meet in the Belarusian capital Minsk after Ukraine expressed a willingness to discuss declaring itself a neutral country while Ukraine had proposed Warsaw as the venue. That, according to Russian spokesperson Dmitry Peskov, resulted in a “pause” in contacts.

“Ukraine was and remains ready to talk about a ceasefire and peace,” Zelenskiy's spokesperson, Sergii Nykyforov, said in a Facebook post. “We agreed to the proposal of the President of the Russian Federation.”

But U.S. State Department spokesperson Ned Price said Russia's offer was an attempt to conduct diplomacy “at the barrel of a gun” and Putin's military must stop bombing Ukraine if it was serious about negotiations.

At the United Nations, Russia vetoed a draft Security Council resolution that would have deplored its invasion, while China abstained, which Western countries took as proof of Russia's isolation. The United Arab Emirates and India also abstained while the remaining 11 members voted in favour.

The White House asked Congress for $6.4 billion in security and humanitarian aid for the crisis, officials said, and Biden instructed the U.S. State Department to release $350 million in military aid.

President Cyril Ramaphosa has called for mediation and engagement to end the war unfolding between Russia and Ukraine which is threatening to lead to ...
News
5 months ago

US president Joe Biden unveiled harsh new sanctions against Russia on Thursday after Moscow launched an all-out invasion of Ukraine.
News
5 months ago

Effects of Russia's Ukraine invasion will be felt by SA, experts say

While Russia’s military action in Ukraine might seem far away its effect is already being felt in SA markets.
News
5 months ago
Next Article