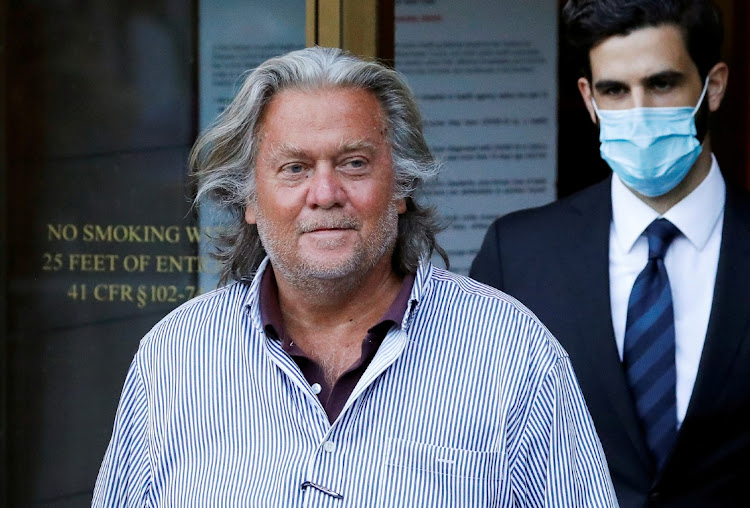 The U.S. House of Representatives Select Committee investigating the deadly Jan. 6 riot at the Capitol has subpoenaed four former members of Donald Trump's administration, including Mark Meadows and Steve Bannon, the panel's chairman said on Thursday.

Meadows, a former congressman, served as Trump's White House chief of staff. Bannon was a White House adviser to Trump.

A representative for Meadows said he declined to comment. Bannon and Scavino could not be reached for immediate comment.

Patel said in a statement he was "disappointed, but not surprised" the committee issued a subpoena before seeking his voluntary cooperation.

A mob of Trump supporters stormed the Capitol on Jan. 6 as Congress was meeting to certify Democrat Joe Biden's election victory, delaying that process for several hours as then-Vice President Mike Pence, members of Congress, staff and journalists fled from rioters.

Nearly 600 people have been arrested on charges tied to the attack. It was the worst violence at the seat of the U.S. government since the British invasion during the War of 1812.

Thompson said Meadows reportedly communicated with state and federal officials as part of an effort to overturn the 2020 election or prevent Biden’s certification. Meadows was also reportedly in communication with organizers of the Jan. 6 rally, Thompson said.

Capitol on high alert as pro-Trump demonstrators converge for rally

Hundreds of police officers will be on duty around the U.S. Capitol braced for a rally by supporters of the hundreds of people who breached the ...
News
11 months ago

'ALL HELL IS GOING TO BREAK LOOSE'

In a letter to Bannon, Thompson noted that he had been involved with multiple conversations about persuading members of Congress to block certification of Trump's election defeat.

"You are quoted as stating, on Jan. 5, 2021, that 'all hell is going to break loose tomorrow,'" Thompson wrote. "Accordingly, the select committee seeks both documents and your deposition testimony."

Bannon was fired by Trump August 2017 but they later mended fences and stayed in contact. Trump pardoned Bannon after he was charged with swindling the president's own supporters over an effort to raise private funds to build a border wall.

Meadows and Scavino have been instructed to appear for depositions on Oct. 15 and Bannon and Patel on Oct. 14.

Thompson said in his letter to Scavino that he was a witness to Trump's activities on the day of the riot. "You may also have materials relevant to (Trump's) videotaping and tweeting messages on January 6," Thompson said.

Patel, who served as chief of staff to acting Defense Secretary Christopher Miller, reportedly spoke repeatedly to Meadows on the day of the riot.

They are among 10 House Republicans who voted to impeach Trump on a charge of inciting the violence in a fiery speech repeating his false claims that his defeat was the result of widespread fraud. The Senate later acquitted him.

"We will fight the Subpoenas on Executive Privilege and other grounds," Trump said in a statement.

In February Caldwell pleaded not guilty to several charges, including plotting with others to disrupt the proceeding in Congress.
News
11 months ago

The US Capitol rioter nicknamed the "QAnon Shaman" is disappointed Donald Trump did not pardon him, his defense lawyer said on Friday after the man ...
News
11 months ago

US President Joe Biden will visit all three sites of the September 11, 2001, hijacking attacks next week to honor the nearly 3,000 people killed and ...
News
11 months ago
Next Article