Capitol on high alert as pro-Trump demonstrators converge for rally 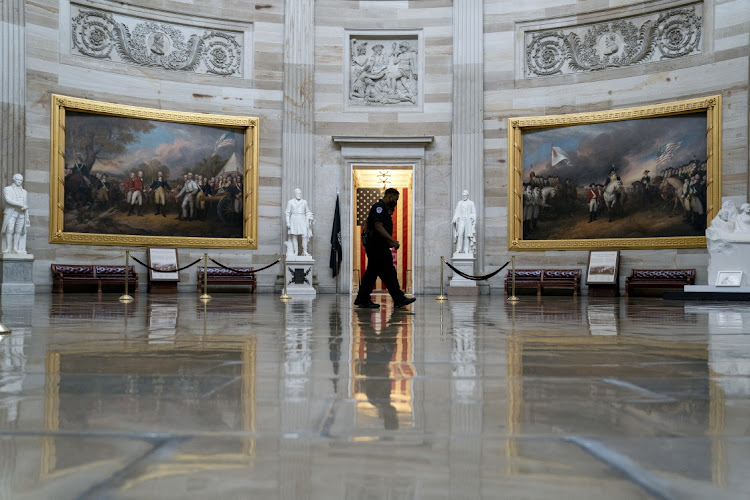 Hundreds of police officers will be on duty around the U.S. Capitol on Saturday braced for a rally by supporters of the hundreds of people who breached the building on Jan. 6 trying to overturn former President Donald Trump's election defeat.

A black eight-foot-high (2.44 m) fence which surrounded the white-domed building for about six months after the attack is back, 100 National Guard troops are on standby and security officials are performing additional checks on travelers arriving at Washington's nearest airport in an effort to prevent violence.

Organizers of the "Justice for J6" rally said they expected a peaceful event, but U.S. Capitol Police Chief J. Thomas Manger told reporters on Friday "there have been some threats of violence" linked to the event, where police would work to avoid clashes between Trump supporters and opponents. 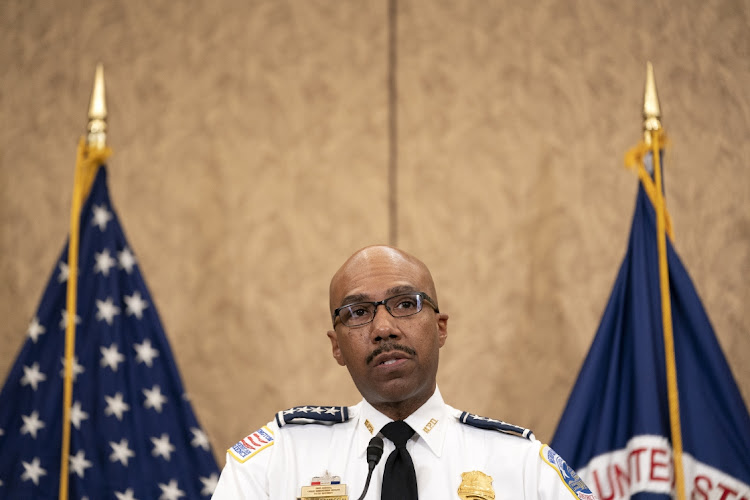 Robert J. Contee, Chief of the D.C. Metropolitan Police Department, speaks during a news conference ahead of a planned "Justice for J6" rally in Washington, D.C., U.S. A demonstration this Saturday in support of people arrested in the Jan. 6 insurrection has prompted security officials to warn members of Congress and their staffs to stay away from the Capitol on that day.
Image: Stefani Reynolds

More than 600 people have been charged with taking part in the Jan. 6 violence, which followed a speech by Trump reiterating his false claims that his election loss to Democratic President Joe Biden was the result of widespread fraud. Those claims have been rejected by multiple courts, state election officials and members of Trump's own administration.

Rioters that day battled police, beating them with sticks and metal barricades, smashed their way through windows into the Capitol building and ran through the halls, sending lawmakers and then-Vice President Mike Pence running for safety.

Four people died that day, one fatally shot by police and three from medical emergencies. A Capitol Police officer who had been attacked by protesters died the day after and four police officers who took part in the defense of the Capitol later committed suicide.

Almost 50 people have so far pleaded guilty to charges related to the violence, nine admitting to committing felonies. The vast majority of defendants have been released awaiting trial but about 75 are still in custody, according to court documents.

In February Caldwell pleaded not guilty to several charges, including plotting with others to disrupt the proceeding in Congress.
News
4 months ago

Members of the right-wing groups the Proud Boys, Oath Keepers and Three Percenters are among those charged with storming the building.

"It's ironic that the rallying cries justice for January 6th. I think justice for January 6th would have been the impeachment and removal of Donald Trump," said Representative Adam Kinzinger, one of 10 House Republicans who voted to impeach Trump on a charge of inciting the Jan. 6 violence, in an interview with MSNBC.

Trump was ultimately acquitted by the then-Republican-controlled Senate.

"It's time we stop as a party or leaders accepting somehow these ideas of Oath Keepers, which is basically a militia that wants to overthrow the government, that that's okay," Kinzinger said.

Matt Braynard, a supporter of Trump's false claims that his defeat was the result of widespread fraud who is organizing the rally, said he hoped it would lead to the release of people charged with taking part in the events of Jan. 6.

"What we really want to do is put a spotlight on the mistreatment of these individuals and encourage federal legislators to demand the Department of Justice deliver real justice to these people. And that means, in many cases, dropping charges," Braynard said in an interview on C-SPAN.

While hundreds have been arrested for taking part in the riot -- some of whom posted images online of their activities on Jan. 6 -- questions remain unanswered. No suspects have yet been identified in the investigation into who planted pipe bombs at the Democratic and Republican parties' national headquarters near the Capitol on Jan. 5.

A California man was arrested early this week after he was found near the Capitol with multiple large knives that are banned in the District of Columbia. His truck was decorated with white supremacist symbols and he made racist comments when approached by police, according to court documents.

Unlike on Jan. 6, when Congress was in session to formally certify Biden's election, the Capitol will be largely empty on Saturday, with most members out of town.

Defense Secretary Lloyd Austin has put 100 National Guard troops on standby to help police protect the Capitol if needed. The National Guard troops, who will be unarmed except for batons, would be used after local, state and federal law enforcement capabilities had been tapped, the spokesman said.

National Guard troops were stationed in and around the Capitol from early January through late May, with as many as 5,200 troops in place at the mission's peak.

The US Capitol rioter nicknamed the "QAnon Shaman" is disappointed Donald Trump did not pardon him, his defense lawyer said on Friday after the man ...
News
4 months ago

US President Joe Biden will visit all three sites of the September 11, 2001, hijacking attacks next week to honor the nearly 3,000 people killed and ...
News
4 months ago

U.S. charges man who made bomb threat near U.S. Capitol

The United States on Friday charged a North Carolina man who claimed to have a bomb in his truck near the U.S. Capitol the day before, leading to a ...
News
5 months ago
Next Article