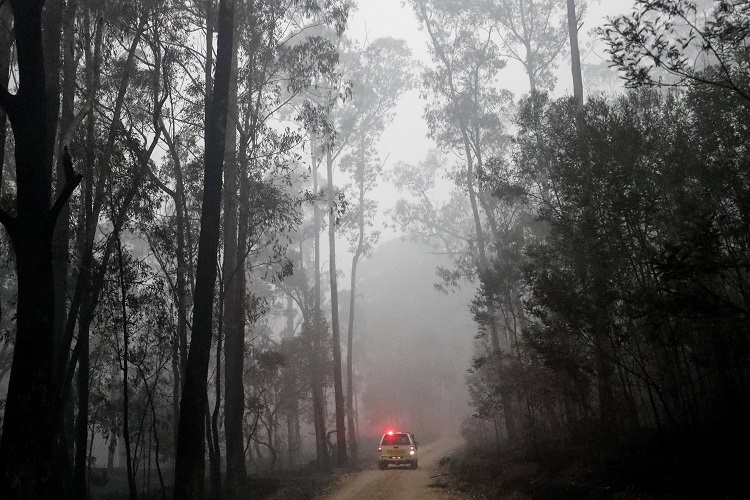 Australia's government is sticking firmly to a position that there is no direct link between climate change and the country's devastating bushfires, despite public anger, the anguish of victims and warnings from scientists.

Instead they say Australia, which contributes 1.3% of the world's carbon emissions but is the second-largest emitter per capita behind the United States, should be rewarded for beating its emissions reduction targets for 2020.

"When it comes to reducing global emissions, Australia must and is doing its bit, but bushfires are a time when communities must unite, not divide," Taylor said in emailed comments to Reuters on Tuesday, while he was busy at bushfire relief centres in his constituency in New South Wales state.

Stepping up efforts to cut emissions would harm the economy, the government argues, especially if it hurt Australia's exports of coal and gas. The country last year overtook Qatar as the world's top exporter of liquefied natural gas.

"In most countries it isn't ­acceptable to pursue emission­reduction policies that add substantially to the cost of living, ­destroy jobs, reduce incomes and impede growth," Taylor wrote in The Australian newspaper on Dec. 31.

"That's why we won't adopt (opposition) Labor's uncosted, reckless, economy-destroying targets that will always result in a tax on ­energy, whether it is called that or not."

Taylor did not detail exactly how cutting emissions would raise the cost of living.

Australians have complained that due to a lack of energy policy, power prices have risen substantially in recent years placing a heavy burden on household incomes, even as energy producers are gradually shifting to cheaper renewables.

Environmental groups say Australia will only meet its emissions targets by including old carbon credits the government wants to count from the 1992 Kyoto Protocol.

Scientists say climate change is a key factor in the destructive wildfires.

The burning forests are a double whammy for the environment, as they add to carbon emissions while also removing carbon sinks which will take decades to grow back, said David Holmes, director of the Monash University Climate Change Communication Research Hub.

Australia's bushfires since September have emitted about 350 million tonnes of carbon dioxide, equal to two-thirds the country's annual emissions from man-made sources, estimated Pep Canadell, director of the Global Carbon Project, based on data from NASA satellites.

Australians face the trauma of returning to razed homes

Australians who fled for their lives from raging bushfires faced the trauma Friday of returning to see if they still had homes, as firefighters ...
News
8 years ago

To others, from opposition Labor to film star Russell Crowe, who skipped the Golden Globes awards to fight bushfires in Australia, to U.S. Senator Bernie Sanders, the link is clear between climate change and Australia's fires which have killed 25 people, destroyed thousands of homes and razed more than 8 million hectares (20 million acres) of land since September.

"I say to those who are delaying action on climate change: look at the blood-red sky and unbreathable air in Australia because of raging forest fires," Sanders said on social media last week.

Amid an outbreak of fires in several states in November, Labor leader Anthony Albanese urged Morrison to beef up resources to prepare for, fight and prevent disasters.

"The fire season is starting earlier and finishing later, and emergency leaders agree that extreme weather events in Australia will only increase in severity and frequency, due to climate change," Albanese wrote in the Nov. 22 letter, which he posted on social media.

Three people have died, four are missing and at least 150 homes have been destroyed as bushfires rage across eastern Australia, authorities said on ...
News
2 years ago