Australians face the trauma of returning to razed homes 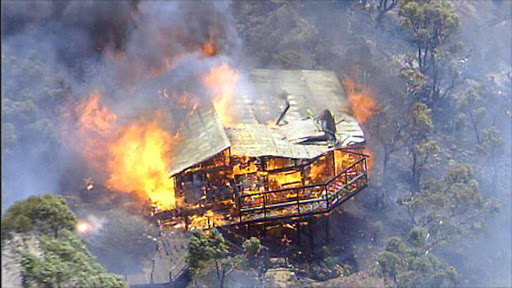 Australians who fled for their lives from raging bushfires faced the trauma Friday of returning to see if they still had homes, as firefighters battled worsening conditions to douse about 100 blazes.

After two days of cooler weather, heat and high winds returned to much of the country as fire crews tackled the infernos that have been burning for a week, 20 of them out of control in the most populous state of New South Wales.

The southern island state of Tasmania has been hardest hit, with more than 100 homes razed, most in the fishing village of Dunalley which was cut off by the fires, forcing some residents to make dramatic escapes by boat.

The worst-affected areas have been in virtual lockdown since the fast-moving flames wreaked devastation a week ago, and townspeople are only now making the harrowing journey to inspect the damage.

Many have no idea whether their houses are still standing and with smoke still billowing overhead, police warned fires remained active in the area as emergency crews worked to clear roads and restore electricity supplies.

"Hopefully (there will be) a house sitting there," a nervous Chris Behrens told reporters of his property at Murdunna as he prepared to head back.

"It was all right on Saturday but they think the fire may have been coming back that way, that's why they asked us to leave."

"It must be remembered that some of these people don't know whether they have lost their homes, whether they've been badly damaged or saved from the fire," he said.

"The health officials tell us that it's not unreasonable or unexpected that people are going to go through a whole range of emotions."

Tasmania's chief health officer, Roscoe Taylor, said residents needed to wear disposable overalls and masks to protect against risks such as asbestos dust as they search through the debris.

Total fire bans were in place across New South Wales and Victoria states, as well as the Australian Capital Territory which surrounds Canberra, with the mercury hitting the low to mid-40 degree Celsius range (above 104 F) in places.

The bans prohibit the lighting of any fires in the open air and any other activities that may spark a blaze.

"Our prime objective today has been to jump on every new fire as quickly as we can very aggressively because the conditions tomorrow are worse and we don't need new fires going into those conditions," NSW Deputy Rural Fire Service Commissioner Rob Rogers said.

Despite fires raging across southeast Australia, only a handful of homes have been destroyed outside of Tasmania, although thousands of head of stock have died and more than 350,000 hectares (865,000 acres) of land scorched.

Wildfires are a fact of life in arid Australia, where 173 people died in the 2009 Black Saturday firestorm, the nation's worst natural disaster in modern times.