Saudi airman in U.S. for training suspected in deadly shooting at Florida naval base 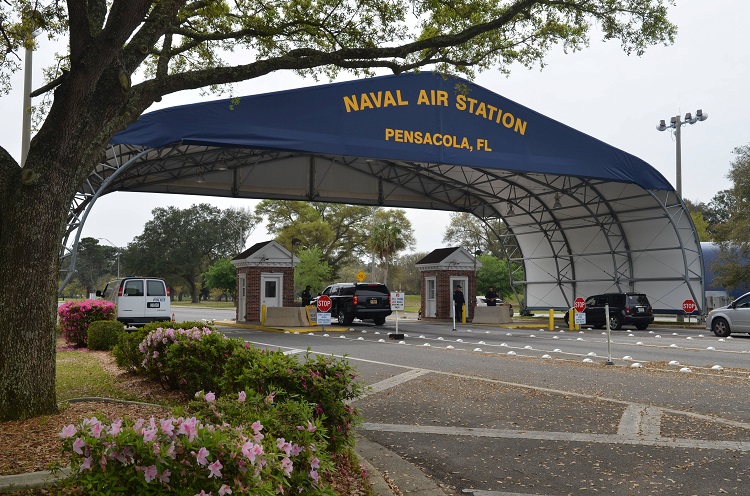 The main gate at Naval Air Station Pensacola is seen on Navy Boulevard in Pensacola, Florida, U.S.. The station was the scene of a shooting which played out over two floors in a classroom building at the base.
Image: U.S. Navy/Patrick Nichols/Handout via REUTERS

A Saudi Air Force second lieutenant killed four people and wounded eight others on Friday in an unexplained shooting rampage at a U.S. Navy base in Florida where he was training, U.S. officials told Reuters.

Sheriff's deputies responding to the early-morning incident shot and killed the gunman, who was armed with a handgun at the U.S. Naval Station in Pensacola, Navy and local law enforcement officials said.

The shooting, which played out over two floors in a classroom building at the base, marked the second deadly shooting at a U.S. military installation this week, following a similar incident at the joint Air Force and Naval base at Pearl Harbor on Wednesday.

Florida Governor Ron DeSantis said the suspect was attending training at the base as part of long-standing Navy program involving members of the Saudi military.

"The government of Saudi Arabia needs to make things better for these victims. They are going to owe a debt here, given that this was one of their individuals," DeSantis said at a news conference.

"The King said that the Saudi people are greatly angered by the barbaric actions of the shooter," Trump wrote on Twitter.

Salman condemned the shooting in a written statement and said his government's security services were working with U.S. agencies to uncover the cause.

"The perpetrator of this heinous crime does not represent the Saudi people, who count the American people as friends and allies," Salman said.

FBI investigators, who were leading a probe into the shooting, declined to identify the gunman and said at an evening news conference they had not established a motive for the attack.

More U.S. children die in mass shootings at home than at school -study

Three out of four U.S. children and teens killed in mass shootings over the past decade were victims of domestic violence and generally died in their ...
News
2 years ago

But U.S. officials familiar with the case told Reuters on condition of anonymity that the suspect had been identified as Saudi Second Lieutenant Mohammed Saeed Alshamrani.

"There are many reports circulating but the FBI deals only in facts. As soon as we can we will share more," Rachel Rojas, special agent in charge of the FBI's Jacksonville office, told a news conference.

In addition to the two people slain, two sheriff's deputies were injured in the attack, one shot in the arm, the other in the knee, but both were expected to survive, officials said at an earlier news conference.

The first reports of an "active shooter" on the base reached the Escambia County sheriff's office at about 6:51 a.m. and a few minutes later a sheriff's deputy fatally shot the suspect in a classroom on the base, Sheriff David Morgan said.

In recent weeks, 18 naval aviators and two aircrew members from the Royal Saudi Naval Forces were training with the U.S. Navy at Pensacola, according to the Navy.

The group came under a Navy program that offers training to U.S. allies. Some 200 foreign students are in the program, said Captain Timothy Kinsella, the commander of the base.

A person familiar with the program said Saudi Air Force officers selected for military training in the United States are intensely vetted by both countries.

The Saudi personnel are "hand-picked" by their military and often come from elite families, the person said, speaking on condition of anonymity because they did not have permission to speak to a reporter.

U.S. Defense Secretary Mark Esper said he wanted to see whether U.S. vetting of these foreign military personnel was adequate.

"I want to make sure that we're doing our due diligence to understand: What are our procedures? Is it sufficient?" Esper told reporters. "Are we also screening persons coming to make sure they have their life in order, their mental health is adequate."

"We shouldn't be providing military training to people who wish to harm us," Scott wrote on Twitter.

The Pensacola base, near Florida's border with Alabama, is a major training site for the Navy and employs about 16,000 military and 7,400 civilian personnel, according to its website.

Military personnel are normally restricted from carrying weapons on U.S. bases unless they are part of their daily duties. Nonetheless bases have seen deadly mass shootings before, including one in Ford Hood, Texas, in 2009 that left 13 dead and one at the Washington Navy Yard in 2013 that killed 12.

Harris goes after Biden on race in U.S. presidential debate
News
2 years ago

Iran says it will respond firmly to any U.S. threat as tension spikes

Iran says it will respond firmly to any U.S. threat as tension spikes
News
2 years ago
Next Article