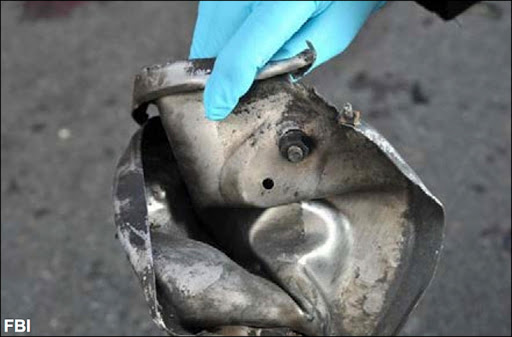 The deadly explosives detonated at the Boston Marathon were homemade devices full of nails and metal fragments, possibly packed into kitchen pressure cookers, US officials said.

A day after an attack that left three dead and more than 180 wounded, the FBI said the crude bombs may have employed pressure cookers, a common tactic seen in attacks from Afghanistan to France since the 1990s.

"Among items partially recovered are pieces of black nylon, which could be from a backpack, and what appear to be fragments of BBs and nails, possibly contained in a pressure cooker device," Rick DesLauriers, head of the FBI's Boston office, told reporters.

Both of the bombs had been placed in a dark colored nylon bag or backpack, DesLauriers said.

Bomb specialists and dog teams combed the scene at Boylston Street, the finish line of the city's renown marathon, while authorities sent blast evidence to the FBI's laboratory in Quantico, Virginia for a thorough analysis.

"The scene is going to take several days to process," said Gene Marquez, acting special agent in charge of the Bureau of Alcohol, Tobacco, Firearms and Explosives office in Boston.

Police, who were still unsure if the attack had domestic or foreign roots, said the area had been swept twice before the race and no explosives were found.

Emergency workers and doctors who treated the victims said the bombs appeared to have sent nails, ball bearings and metal fragments flying, causing injuries mostly to the lower part of the body, and forcing amputations for some patients.

"There are a variety of sharp objects that we found in their bodies," said George Velmahos, chief of trauma surgery at Massachusetts General Hospital.

"Probably these bombs had multiple metallic fragments in them and we removed pellets and nails," he said.

The devices were "placed probably low on the ground, and therefore lower extremity injuries are to be expected," Velmahos added.

The relatively limited scale of the two explosions and the white smoke that rose up afterward seemed to rule out military-type plastic explosives such as C4 or Semtex, which tend to produce more powerful detonations with black smoke, experts said.

Speculation focused on what type of improvised devices had been used, possibly a pipe bomb or an acetone peroxide explosive, which are both relatively easy to make and to conceal.

An acetone or TATP explosive was employed in the 2007 London bombings, an attack on the 1996 Olympics in Atlanta and a failed attempt by "shoe bomber" Richard Reid in December 2001 to detonate a device on a Miami-bound flight.

The organic peroxide, however, is unstable and sensitive to any heat and friction, with bomb-makers often suffering injuries when preparing the devices.

In 2010, the first issue of an English-language magazine by Al-Qaeda in the Arabian Peninsula (AQAP), the terror group's Yemeni affiliate, included an article explaining how to make an explosive with a pressure cooker and shrapnel.

The article was titled "Make a Bomb in the Kitchen of Your Mom" and had a photo of a backpack concealing the explosive.

White supremacists in America took note of the article and one online forum, Stormfront, called the how-to manual "highly recommended reading," according to SITE.

Pressure-cooker explosives were behind a wave of attacks in France in 1995 and in 2003, the Department of Homeland Security issued a bulletin warning authorities to be on the lookout for extremists using pressure-cooker bombs.

The bulletin said it was a "technique commonly taught in Afghan terrorist training camps" and that pressure-cooker bombs were used in attempted attacks or plots in India and Algeria, as well as an assault in Nepal.

"Typically, these bombs are made by placing TNT or other explosives in a pressure cooker and attaching a blasting cap at the top of the pressure cooker," the bulletin said.