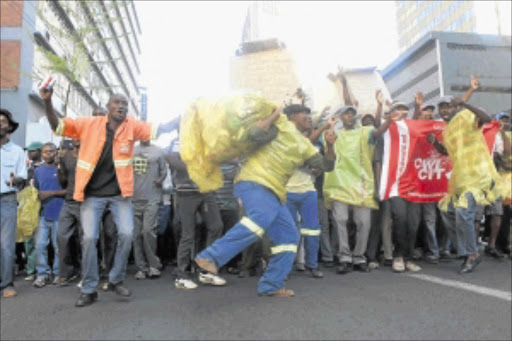 TOOLS DOWN: Contract workers toyi-toyi in Pretoria demanding to be absorbed into the Metro. PHOTO: PEGGY NKOMO

A PROTEST by angry municipal employees almost turned ugly in the streets of Pretoria yesterday morning when police fired rubber bullets at the large crowd protesting outside the municipal offices.

About 300 contract workers employed by the Tshwane municipality through labour brokers marched to the offices where they sang struggle songs. Traffic came to a standstill in some streets and police fired rubber bullets to disperse the crowd.

Workers and Socialist Party (Wasp) said workers were demanding the implementation of an agreement to absorb all workers employed by labour brokers as permanent municipal workers from April 15 2013.

Wasp spokesman Mametlwe Sebei said: "The workers are demanding no more than that the council enforces its own decision.

"A circular issued by the human resources division of the Tshwane corporate and shared services department sent out to all executive directors advised them of the agreement with organised labour that all labour broker employees who had completed 12 months of service as of February 28 2013 are to be absorbed as permanent employees as from April 15."

But Tshwane municipality spokeswoman Nomasonto Ndlovu said the city knew nothing about such an agreement. "Our labour relations section says there is no agreement with the people who protested outside Isivuno House. The Workers and Socialist Party is not a union that is recognised within the local government sector," she said.