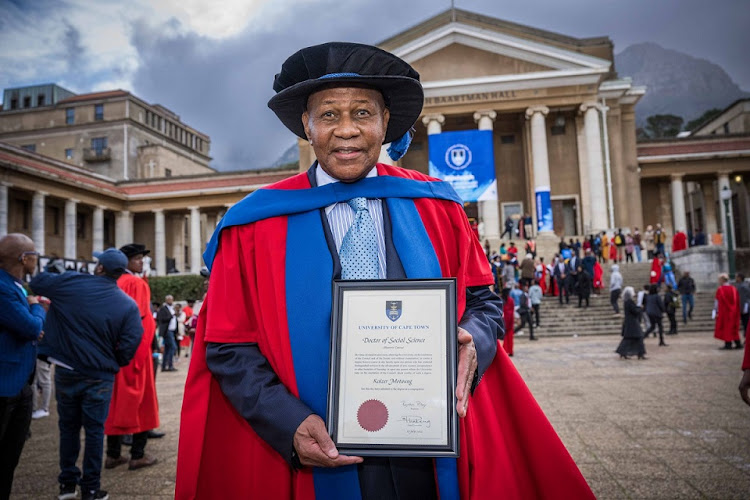 Kaizer Chiefs owner Dr Kaizer Motaung said “never in his wildest dreams” growing up in Soweto and in his formative years as a footballer could he imagine he would receive an honorary doctorate from the University of Cape Town (UCT).

Motaung, who founded the institution that is the country’s most-supported sports team, financial behemoth Chiefs, as a breakaway from his previous team Orlando Pirates in 1970, received the doctorate in a ceremony at UCT on Friday.

“It’s a truly memorable day for me because it’s one of those rare occasions and moments in my life I will always treasure,” he said.

"It was a memorable day in my life because it is a recognition by other people for the role I played with the help of others in football and this colossal brand that is Kaizer Chiefs. I’ll always treasure the day." - Dr Kaizer Motaung #DrKaizerMotaung #Amakhosi4Life pic.twitter.com/w5pKzADIjD

“It was a great day for SA football, but in particular Chiefs. And of course my family because what happened today is a recognition by a lot of other people of the part I’ve played in this journey.

“I’ve only been part of the journey, though I took a leadership role in this interesting journey of this colossal brand of Kaizer Chiefs.”

Motaung, lovingly nicknamed “Chincha Guluva” as a player at in the 1960s for Pirates and 1970s for the overnight success that was star-studded glamour club Chiefs, is remembered among SA football's greats for his playing ability alone.

He said, in those formative years as he starred for the Buccaneers and formed Chiefs at the height of apartheid, he could never have envisioned receiving a doctorate from UCT.

“Never in my wildest dreams did I ever think of something like this. But life being what it is, when I look back and reflect on where I come from I realise that not only was it because it was a calling that came upon me to take this route, but it taught me lessons in life. That life is a journey and like any other journey it has its own ups and downs.

“It just proved one thing — life can be challenging but life can also become fruitful depending on the determination one puts into whatever they do.”

It was an exciting weekend for Chiefs, as their reserve team won the knockout DStv Diski Shield with a 2-0 win against Stellenbosch FC in the final at Mpumalanga Stadium in Durban on Saturday.