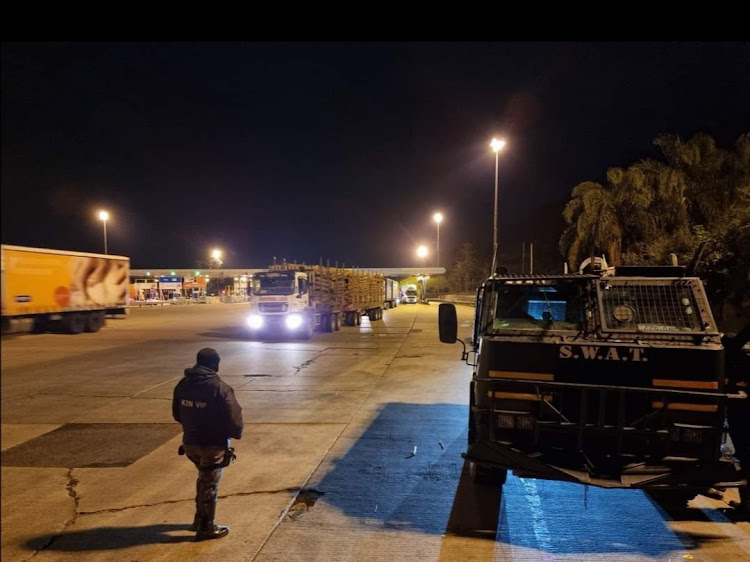 KwaZulu-Natal businesses have hired private security to ensure trucks are not looted on main routes in the province.
Image: KZN VIP Protection

KwaZulu-Natal business entities have hired private security companies to help prevent looting of trucks and disruptions to the transportation of goods on the N2 and N3 highways.

Last week parts of the N3 between Johannesburg and Durban were brought to a standstill by truckers protesting against the employment of foreign national drivers.

The blockades caused major delays to trucks transporting goods to and from the province and the loss of more than R300m.

Glen Naidoo, head of KZN VIP Protection, one of the companies providing security, told TimesLIVE on Tuesday “certain business entities” hired private firms to ensure the smooth transporting of goods and the security of their drivers.

He said he could not reveal the identity of his clients because of safety concerns.

Naidoo said it was a collaboration with other security entities.

“This route is the main roadway for the distribution of goods from KwaZulu-Natal to other provinces which is continuously disrupted by truck protests which create massive delays and extensive damage to vehicles.

“The private sector has deployed specialised security forces along the N3 on specific days to ensure the smooth flow of operations with no delays or disruptions.”

Naidoo said anti-riot teams have been deployed to the Mariannhill and Mooi River tolls on the N3, as well as on the N2 between Phoenix and Umhlanga and in Prospecton, south of Durban.

Last week the Durban Chamber of Commerce and Industry condemned the truck blockades, saying they were “economic sabotage”.

N3 truck blockade: 'Act now or we will have no country left,' implores open letter to President Cyril Ramaphosa

Business leaders and freight industry role players are pleading with President Cyril Ramaphosa to take action on the truckers' blockade of the N3 ...
News
1 week ago

Another truck blockade has resulted in Van Reenen's Pass on the N3 being closed on Thursday morning.
News
1 week ago

Truck protest on N3 brings traffic to a halt

Protesting truckers have blocked off part of the N3 between Warden and Villiers in the Free State.
News
1 week ago
Next Article