SA cannot recover fully till KZN is back on track — Ramaphosa 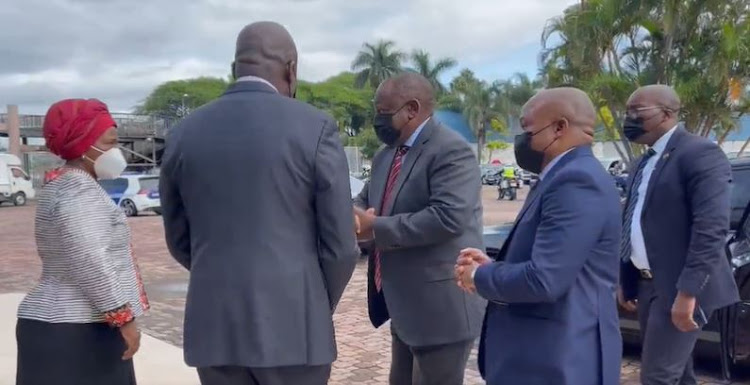 President Cyril Ramaphosa arrives at the Durban Exhibition Centre on Sunday to meet with the Durban Chamber of Commerce and Industry.
Image: @kzngov via Twitter

The economic reconstruction and recovery under way across the country in the aftermath of the Covid-19 pandemic cannot succeed without the swift, comprehensive and sustainable recovery of the economy of KwaZulu-Natal.

That is why the government is firmly committed to giving the business community in KwaZulu-Natal all the necessary support, resources and technical capacity to recover from the recent catastrophic floods, President Cyril Ramaphosa said on Sunday.

He was addressing members of the Durban Chamber of Commerce and Industry.

He said the disaster proved “we are not as ready to deal with natural disasters”.

“The collective state of readiness for natural disasters has to be drastically improved, and disaster risk assessments by all provinces have to be regular and ongoing.”

There will now be a clear expectation that municipalities, provinces and departments should develop, update, review and submit their disaster management and contingency plans to the National Disaster Management Council, he said.

Before travelling to Durban he met with the respective ministers and officials to receive reports on progress made in the multisectoral flood response and recovery plan.

“Declaring the floods as a national state of disaster has enabled us to mobilise more resources, capabilities and technical expertise within the necessarily time frames. As business, your concerns and challenges are very specific.

“Damage to key economic infrastructure such as roads, energy transmission and distribution, water and sanitation facilities and the port of Durban has had — and continues to have — a dire impact on your operations.”

Minister of water and sanitation Senzo Mchunu did not take kindly to the EFF’s criticism and rejection of his more than R110bn budget for the ...
News
2 months ago

Ramaphosa said they were keenly aware that the province's economy was still struggling to recover from last July’s unrest and the impact of a global pandemic that is now in its third year.

Sectors that power the provincial economy such as manufacturing, FMCG, retail and wholesale, distribution, warehousing and freight have been particularly hard hit by these floods.

Given the importance of the Port of Durban to the national and continental economy, restoring operations and rehabilitating damaged port and associated infrastructure has been a priority.

“We have been advised that the Transnet National Ports Authority has so far cleared more than 340 cubic metres of debris from the harbour.”

He said with regards to port traffic, capacity has been restored and the port has handled more than 100 vessels since April 13 and tugs are all operating at full capacity.

Efforts by Transnet to deal with rail infrastructure damage are also proceeding, though this is likely to take some time given the extent of the damage.

A number of road repair projects have been identified with an immediate focus on the N2 and N3 highways and the necessary systems are being put in place so repairs are not delayed and proceed as quickly as possible.

Ramaphosa said it was encouraging that the restoration of services is proceeding well. Eskom has been assisting municipalities with fault detection and repairs and damage assessments.

The KwaZulu-Natal health department has been forced to put some planned maintenance on hold to channel money from its budget to repair infrastructure ...
News
3 months ago

He conceded that despite the progress, challenges remain that have a direct and serious effect on the province's economy.

“The interruptions to rail has affected the delivery of exports to the port, with automotive and citrus produce particularly affected.

“We are encouraged that there are discussions under way with Toyota and the City of eThekwini on what measures are needed to restore the Toyota plant in Prospecton to full capacity, but also to address what is needed to secure resilience for the future.”

A great many lessons have been learnt from this natural disaster, Ramaphosa admitted.

“As government we must now prioritise the integration of climate change and its associated impacts into all government planning.

He said they were encouraged by the efforts of the eThekwini Metro around early warning systems, and to raise awareness in communities about the effects of climate change and the extreme weather associated with it.

“We have agreed in today’s meeting that our foremost priority now must be on helping the people of KwaZulu-Natal to rebuild their lives, and to assist business in the province to get its economic recovery programme back on track.

“We welcome the efforts in this regard that are being driven by the KZN Growth Coalition, of which the Durban Chamber of Commerce forms part.”

Providing financial support to both big and small businesses in distress was discussed at Sunday's meeting between Ramaphosa and the chamber.

“It is critical that this support is mobilised as a matter of urgency to ensure that businesses can stay afloat and that jobs can be sustained.”