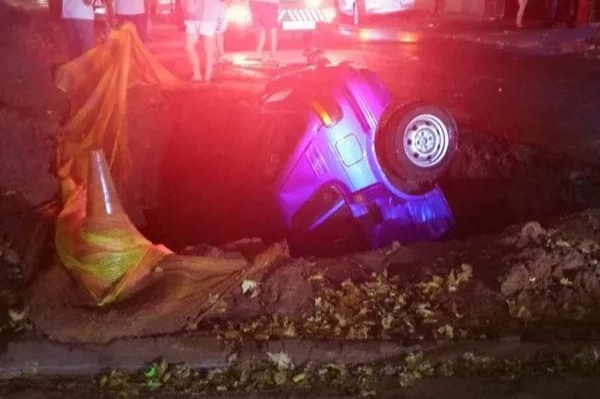 The hole has allegedly been a recurring problem in the Greymont area.
Image: Supplied

A 74-year-old motorist had to be rescued from a giant hole in the road after crashing into it during rainy weather in Greymont, Johannesburg.

The crash, which saw the blue hatchback almost completely disappear, comes after many complaints by residents in the suburb who wanted it repaired. It had originally been dug to fix a water leak in the street.

SCP Security owner Clive Maher said it had been reported as a serious hazard many times.

Maher, who responded to the accident at about 7.35pm on Tuesday, said the motorist sustained cuts and scratches on his head but did not appear to be seriously injured.

He said at least three people had to pull the man out of the vehicle.

“We first thought of the window but we managed to open the door and get the person out of the car. It was very bad because you’ve got somebody whose car has driven into a hole and somebody in the car we had to extricate,” he said.

“Fortunately, we could get the person out quite easily, but he was scared. He couldn’t believe what had happened and it’s unfortunate that it had to happen. We had to get tow trucks and an ambulance to make sure the driver was OK.”

Maher said the hole was not easily visible, even during the day.

“Obviously at night with the rain and poor visibility, and the roads being flooded, the person didn’t see the only emergency cone that was there.

“I think it’s time the council steps up and closes the hole. This is a main road. It is not like a side road in the suburb. It’s a well-used main road.”

Ward 86 councillor Chantelle Fourie-Shawe said the hole had opened up many times over the past few years.

“It has been a recurring problem,” she said.

However, this time it was bigger than usual.

“It was cordoned off, but visibility was low. The material they used to cordon the hole  sometimes sinks into the hole.”

Fourie-Shawe said there had been many complaints from residents.

“Motorists are reminded again to adhere to a safe following distance, slow down during wet conditions, switch on headlamps while driving and always buckle up,” said spokesperson Sello Maremane.

Maremane said accidents and flooding incidents had been reported since the early hours of Wednesday in the province.

“Crashes have been reported, notably along the N1 north towards the Maraisburg off-ramp, the N12/R24 west before Gillooly’s, the N3 north before the London Road exit and the R21 south on the link to the R24 west, to mention a few.

“The province has also experienced flooding in areas such as the Buccleuch low bridge in Johannesburg and Goldman Street, corner Sauer, in Florida, among others,” he said.

He urged motorists to avoid low-lying bridges and areas prone to flash floods.

“We also discourage motorists from driving through fast-flowing water since it is difficult to measure its depth. This is an important step towards saving the lives of road users, especially during rainy conditions. Law enforcement authorities will be on high alert to ensure the safety of road users.”

Failure to repair bridge blamed for loss of life

The area has not been barricaded and there are no visible signs warning motorists of the collapsed bridge or that driving there is dangerous.
News
10 months ago

SUV 'swallowed by road' after driving into water-filled hole

The vehicle had to be lifted out with a crane.
News
1 year ago

On Sunday night a towing operator fell about 5m down a water inspection drain which had one of its covers missing.
News
1 year ago

Man survives electrocution after falling into hole in Sandton

A man was found electrocuted in a hole in Woodmead Drive, Sandton, on Tuesday
News
2 years ago
Next Article