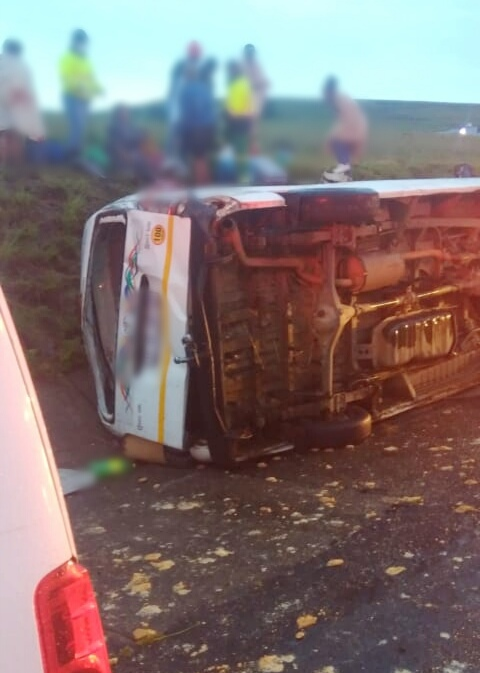 15 people were injured when a taxi overturned on the N3 near Harrismith on Thursday.
Image: Emer-G-Med

The N3 Toll Concession (N3TC) has expressed concern about the “alarming number” of serious crashes on roads between Gauteng and KwaZulu-Natal since the start of the festive season.

“Initial reports indicate that drivers are regularly exceeding the speed limits along most parts of the route. They are also not reducing their speed when roads are wet or visibility is poor.

“Currently, there is little evidence of any patience on the road, and it seems that drivers’ frustrations are aggravated by the long delays caused by the serious road crashes.

“In the interest of overall safety on the route, N3TC appeals to all motorists to take every precautionary measure to ensure that they, and their fellow travellers, arrive at their destinations safely. A collective effort is required to stem this worrying tide.”

In the latest incident on Thursday, 15 people were injured after the minibus taxi they were travelling in overturned on the N3 near Intabazwe, Harrismith, in the Free State.

Emer-G-Med spokesperson Kyle van Reenen said paramedics found the taxi on its side near Montrose.

“The injured were treated and stabilised on the scene, before being taken to a nearby hospital for further care. Slow down and take it easy on the road,” he said.

On Wednesday, three people were killed when a truck collided with a car on the N3 near Lions River in KwaZulu-Natal.

Two people were killed in an accident involving two trucks and a taxi on the N2 and M4 intersection in Gqeberha in the early hours of Wednesday ...
News
5 months ago

A tragic accident in which two colleagues were killed, one seriously injured and five hurt and traumatised has left the 14-member team behind ...
News
5 months ago
Next Article