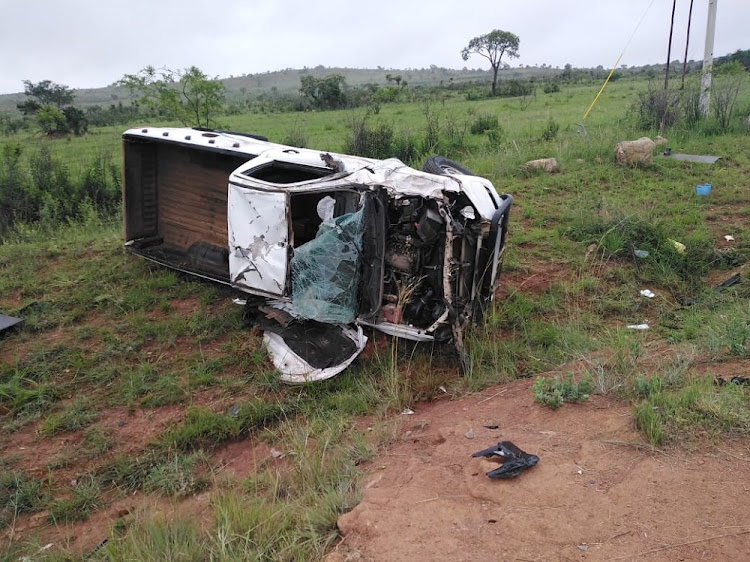 Nine people were killed and 18 others injured after a vehicle overturned along the R573 Road between Kwaggafontein and Moteti in Mpumalanga. The driver has been arrested for culpable homicide, drunk driving, reckless and negligent driving.
Image: Supplied

The driver of a light delivery vehicle (LDV) that was involved in a crash that claimed nine lives on Saturday has been arrested for culpable homicide, drunken driving and reckless and negligent driving.

Mpumalanga department of community safety, security and liaison spokesperson Moeti Mmusi said on Monday morning that the man was attended to by the medical team at  KwaMhlanga Hospital and discharged the same day of the accident.

"He is expected to appear in court soon to apply for bail," said Mmusi in a statement.

Mmusi said the accident happened along the R573 Road between Kwaggafontein and Moteti at about 5am.

"This happened when a light delivery vehicle overturned. It is believed that the driver of the vehicle may have lost control and the vehicle veered off the road before crashing on the side," he said.

Seven people did at the scene, while the other two died while being transported to a hospital and at a health facility, respectively.

At least 18 people were injured.

"The investigation into the crash is already underway. Overloading is one of things that the probe will look into," Mmusi said.