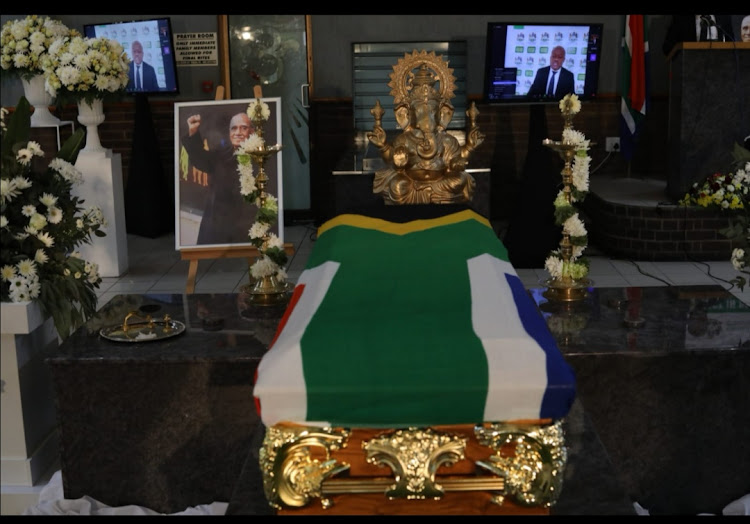 A man of the people who abhorred corruption, lived a humble life and never hesitated to be critical of the liberation movement in SA.

That's how KwaZulu-Natal premier Sihle Zikalala described struggle stalwart Swaminathan Gounden in a tribute at his official provincial funeral in Durban on Thursday.

Zikalala, who is in isolation as a precautionary measure after coming into contact with a Covid-positive person, delivered the address virtually.

Gounden was one of the last surviving delegates to the Congress of the People at Kliptown which drafted the Freedom Charter.

In 2018, President Cyril Ramaphosa conferred on him the Order of Luthuli in recognition of his role in the struggle for SA’s freedom.

"We remember a life – just two weeks short of 94 years – of struggle, sacrifice and an unrelenting commitment to building a democratic, non-racial, non-sexist, united and prosperous society based on justice, equality, the rule of law and the inalienable human rights of all.

KwaZulu-Natal premier Sihle Zikalala is in self-isolation as a precaution but has not presented with any symptoms.
News
6 months ago

"Comrade Swami’s life was punctuated with some of the most iconic moments in our struggle since the 1940s.

"He joined the Communist Party of South Africa (CPSA) in 1944 in the Magazine Barracks – a Durban Corporation labour compound for Indian workers on Somtseu Road.

"In 1945, he was among the young lions led by Dr Monty Naicker who wrested control of the Natal Indian Congress from the conservative bloc.

"In 1946 he was an active trade unionist in the leather workers’ union and an organiser in the great Passive Resistance Campaign against the 'Ghetto Act' of residential segregation.

"When the Freedom Charter was drafted and presented at the historic Congress of the People in Kliptown on June 25 and June 26, Comrade Swami was there as an elected delegate."

Zikalala said Gounden believed in the vision of the Freedom Charter "that South Africa belongs to all who live in it, black and white".

Zikalala said Gounden's activism continued unabated in the underground of the ANC and SACP in spite of persistent harassment by the Security Branch of him and his young family.

"We must take a lesson from his life as we rebuild and renew our society.

"This is a deeply polarising time locally and globally.

KwaZulu-Natal premier Sihle Zikalala has urged regiments of Zulu warriors (amabutho) to take the lead in the province's fight against gender-based ...
News
7 months ago

"Covid-19 has been devastating with loss of loved ones and a battering to our economy that was compounded by July’s looting and destruction of economic infrastructure.

"But hope must spring eternal.

"Cde Swami never shied away to critique our movement and the counterrevolution that seeks to derail our national liberation struggle. We thank him for being a voice of reason and a sworn enemy of corruption.

"He was unambiguous that corruption and present-day pseudo-revolutionaries were stealing away the future of the poor."