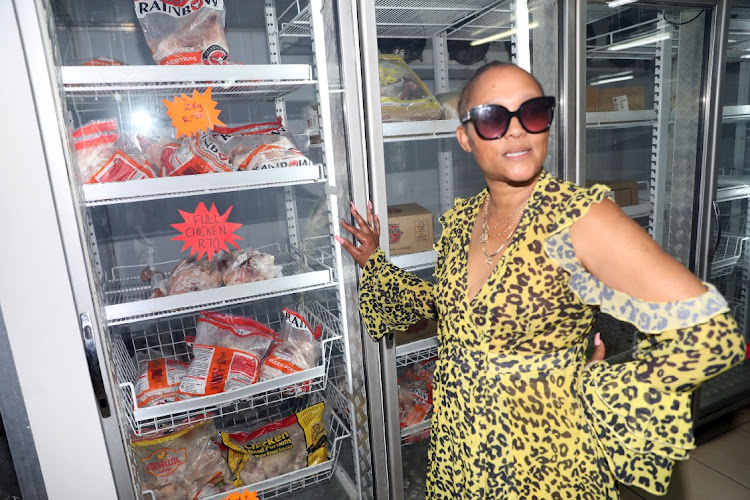 Nelisiwe Mkhabela is the co-owner of T&C Meat CC in Moletsane, Soweto. She runs the local butchery with her husband Tony.
Image: Veli Nhlapo

Small businesses are hanging on by a thread as loadshedding continues to ravage the country.

A family that runs a butchery in Moletsane, Soweto, on Tuesday told Sowetan that they spend about R2,000 a week to store and cut their meat in other butcheries.

Tony Mkhabela, 55, and his wife, Nelisiwe, 51, owners of T&N Meat CC in Moletsane, said they were feeling the pinch as the rolling blackouts also meant customers can't always get meat from them.

Mkhabela said they spend R100 on petrol, R400 for storage and another R400 for cutting the meat at other butcheries, at least twice a week.

They employ 10 people and have been running their business for 20 years.

“Our costs are increasing and our profit goes down. This is a life-threatening situation. Whenever we do not have power and we take our meat to another butchery for storage, a customer walks in to buy our meat and they will walk away because it is not there. This happens all the time when there is no power,” he said.

Mkhabela said they have a generator but it does not assist in the running of the business because it's small.

“We have to fill up our generator with fuel about four times a day at a cost of R400. However, our generator is small and it cannot assist us adequately as it cannot run our big machines which we use to cut the meat,” said Mkhabela.

Nelisiwe said transporting the meat to other butcheries when they do not have electricity reduces its quality.

As Eskom bosses came armed with a list of excuses why the country has been plunged into a power crisis, workers at some of the utility’s power ...
News
2 months ago

Ntombifuthi Mqozi’s business also bears the brunt as she has to throw away some food products.

“I have thrown away three polony products so far. I cannot do anything with them because they would be rotten,” said Mqozi.

Mqozi, who normally wakes up at 4am every day to make chips and fatcakes, said when there is no electricity, she cannot work.

“It is really painful. I have a family to feed,” said Mqozi.

Business owners said they had to scale down production or turn customers away.

Baphiwe Mlungu, who has been running Delicious Foods for 15 years, said the current shortages were “the worst loadshedding ever”.

The pandemic forced Mlungu to retrench two employees. He now employs seven people in his businesses in the Mthatha CBD and Fortgale. “We are suffering. It is worse now because even gas prices have increased. We will be forced to lean towards using gas now, but that is costly.”

A 19kg gas cylinder at R550 lasts him a week, whereas R400 for electricity lasts for a month, he said.

Mlungu said he feared that until a permanent solution to fix Eskom’s woes is found, businesses would suffer.

“We are running at a loss. This is money we did not budget for. I have had to scale down on buying stock because at times food is left over and ruined. The machinery is getting damaged in the process.

“Small businesses survive on daily operations. I had plans to expand my business, but this is standing on the way. We had loadshedding in the past but now electricity is shed two to three times a day.”

Mbuyekezi Daniso, who works at Zondwa Schoolwear and Designs with his sister, said they had to turn away schools who came to them for uniforms.

“We had to buy a generator for R50,000 to try to counter this. Everything we use needs electricity. Petrol has gone up now and during loadshedding we use 10l of petrol for the generator. This is killing us.”

Thobela Nogaga of TN Printing and Graphics said loadshedding could mean the closure of many businesses.

With the festive season looming, his businesses would normally be booming, but not now. “Those responsible for this must fix this permanently as soon as possible.”

The Black Business Council has called for Eskom boss Andre de Ruyter and the parastatal's directors to step down as load-shedding continues to leave ...
News
2 months ago

Eskom CEO Andre de Ruyter said on Tuesday that he was not going to be stepping down, despite growing criticism of ongoing load-shedding across SA.
News
2 months ago

Stage 4 load-shedding for the rest of the week

Eskom said it would implement stage 4 rolling blackouts countrywide starting at 1pm on Monday until 5am on Friday.
News
2 months ago
Next Article