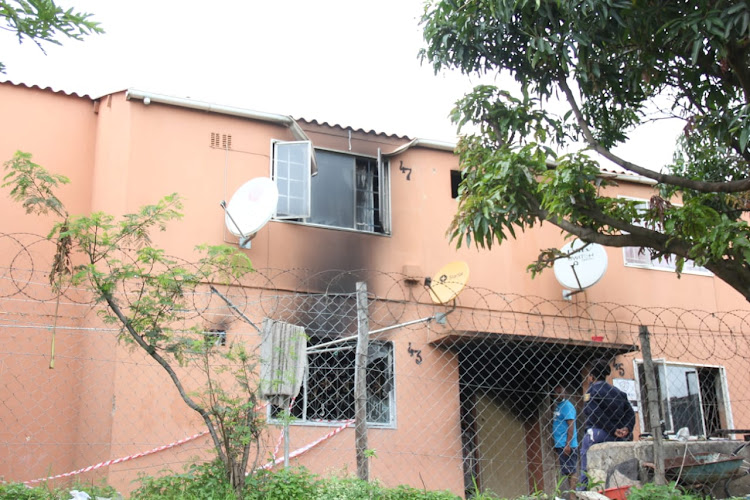 A 57-year old man is facing charges of arson and murder after he fled the scene of a fire in which two women and three children died.
Image: Sabelo Masuku

Forensic investigators combed through a Phoenix block of flats which was set alight in the early hours of Monday morning, killing five people.

Police spokesperson Brig Jay Naicker said a 57-year-old relative had been tracked down and arrested after the devastating incident which has left the Phoenix community reeling.

He said the suspect had serious burn wounds and was admitted to hospital under police guard on Monday afternoon.

A mother and her three children, the youngest of whom was three years old, and another woman died in the blaze.

When TimesLIVE visited the flats on Tuesday, relatives were sitting outside.

An emotional family member declined to speak to the media.

“No comments. We have lost five family members,” he said.

Naicker said he was uncertain when the suspect will be ready to make a court appearance.

“While we sympathise with the family, we also call upon community members to always seek help rather than resort to such drastic acts,” said Singh.

A group of locals is helping  the grieving family members by raising funds to cover burial costs, clothing, toiletries and bedding.

A community member who is part of the initiative said residents had heeded the call to reach out, but they were struggling to secure accommodation for the grief-stricken family.

A man was arrested after five people, including three children, died in a fire in Phoenix, Durban, in the early hours of on Monday.
News
6 months ago

A man who ran into a burning house to try to rescue a three-year-old boy died along with the child when they were trapped in the inferno.
News
7 months ago
Next Article