Lukhanyo Calata’s last stand for justice for the Cradock Four

Lukhanyo Calata has resorted to the courts to compel the Hawks to finalise their investigation into the 1985 murders of his father Fort Calata, Matthew Goniwe, Sicelo Mhlauli and Sparrow Mkonto. 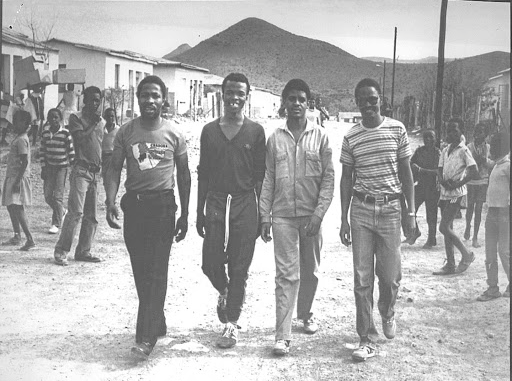 Fort Calata, second from right, and Matthew Goniwe, far right, two of the Cradock Four who were murdered by security police in 1985, are accompanied home by two activists after being released from detention in 1984. Picture: Tiso Blackstar Group
Image: Lightbox

Thirty-six years to the day after he stood holding his mother’s hand as a three-year-old at the grave of his father, Lukhanyo Calata asked the high court in Pretoria to compel the National Prosecuting Authority (NPA) and the police to finalise their investigation and make a prosecutorial decision in his case.

Calata’s anger, outrage and bitterness at the democratic government is evident in his 134-page affidavit. The government for which the Cradock Four fought has failed consistently to deliver on its promises of justice and closure for the families of those who died in the struggle against apartheid.

His application lists 17 respondents, including several high-ranking former members of the apartheid regime who sat in State Security Council (SSC) meetings. Evidence suggests decisions were made here that led to the murders of Matthew Goniwe, Fort Calata, Sicelo Mhlauli and Sparrow Mkonto, who became known as the Cradock Four, on June 25 1985.

None of them applied for amnesty with regard to the Cradock Four murders. And the Truth and Reconciliation Commission (TRC) never asked any of them about their alleged involvement in events that led to the murders. This was despite evidence presented during the 1994 inquest into the deaths that judge Neville Zietsman chaired and subsequent evidence by eight former security force members who applied for and were mostly denied amnesty by the TRC.

Because of delays caused by political interference in the prosecution of TRC cases, the men present when the Cradock Four were murdered have now all died.

The men who sat on the SSC are listed as respondents because their names are mentioned in this evidence. But should the NPA decide to prosecute, there may be an opportunity for those higher in apartheid’s bureaucracy to be held to account for the actions they claim were those of a few “rotten apples”.

As Calata says in his affidavit, none of them have been prosecuted despite “clear evidence that in June 1985, a military signal was sent to the State Security Council Secretariat recommending that my father, Matthew Goniwe and Mbulelo Goniwe be ‘permanently removed from society’.”

The FW de Klerk Foundation says it is against the National Prosecuting Authority's (NPA's) decision to investigate and prosecute apartheid-era ...
News
10 months ago

Calata includes the strange case of a missing investigation docket compiled by a now retired detective who spent eight years gathering information that may have been vital to the NPA’s case. It vanished in 2017 after it was requested by the office of disgraced former acting national director of public prosecutions Nomgcobo Jiba.

Calata says the missing docket and the obstruction of his attempts to open a case of theft with the SAPS to investigate it are yet another sign of possible interference by government officials in the prosecution of the TRC cases.

Calata and the families approached the NPA in May last year to make a final prosecutorial decision. The deadline of July 10 2020 came and went, but the NPA did engage more proactively with them and offer the semblance of an active investigation. But with the death of Goniwe’s widow Nyameka in August last year and little evidence of any real progress, the family have run out of patience.

The NPA and the Hawks’ recent announcement about the formation of a special unit to investigate TRC cases has done little to appease the families. They learnt earlier this year that the last of the foot soldiers responsible for the murders, former security police lieutenant Eric Taylor, died in 2016.

Calata says the lapsed time that has allowed Taylor and his fellow murderers to escape justice is a direct result of the political interference by former members of the ANC-led government in the prosecution of TRC cases.

“The post-apartheid era of cover-ups, ineptitude and denial of justice stands as a deep betrayal of the ultimate sacrifices made by my father and his comrades. It adds insult to injury and bitterly exacerbates the emotional and psychological trauma, pain and suffering we have endured as families.”

Calata describes the lengthy silence of the government and the ANC about the suppression of TRC cases as “deafening” and decries ANC legal adviser Krish Naidoo’s statements that these cases “simply fell through the cracks” as “deeply insulting to our intelligence. It stands as an obvious and wilful attempt to mislead the public and protect themselves from scrutiny.”

It is not necessary for an application such as this to provide much evidentiary detail. But Calata and his lawyers have made the significant decision to break down who the Cradock Four were, the political activities in which they were engaged, how the apartheid government responded to their activities, the decisions made at the highest levels of the regime, who was involved in making those decisions and carrying them out, and what led to the 36-year delay in bringing them to book.

Nyameka Goniwe, wife of one of the 'Cradock Four', has died

The wife of one of the Cradock Four, councillor Nyameka Goniwe, has died.
News
1 year ago

A section of Calata’s affidavit outlines the chain of command in the apartheid security cluster to demonstrate that “those serving on the SSC and its structures were either party to the issuing of instructions, such as the elimination of the Cradock Four and its cover-up, or were kept informed of such plans and what transpired in the aftermath”.

This calls into question the long-held assertion by De Klerk and other high-ranking officials that they never issued orders that resulted in the murder of anti-apartheid activists. Calata says SSC members “must still be held to account for their roles in tacitly approving the operations” and for not stopping them or punishing the perpetrators.

In the case of the Cradock Four, a military signal sent on June 7 1985 from the Eastern Cape command to the SSC links the murderous actions of the regional Security Branch to the very top of the apartheid command chain. It proposed that Goniwe, his nephew Mbulelo and Fort Calata “as a matter of urgency, be permanently removed from society”.

Given that the Security Branch killed Goniwe and Fort Calata 18 days later, the affidavit says their murders were “not a private frolic and that the recommendation in the signal was … approved directly or tacitly by the SSC”.

A recent revelation by Vlok means former SSC members can no longer argue that they didn’t know the true meaning of the phrase “permanently remove”, says Calata. In an Al Jazeera documentary about the Cradock Four, journalist Hamilton Wende asked Vlok what it meant. He replied: “You know, we in the Security Council, we were very careful not to tell, not to say and to make a note and to have in the minutes to kill anybody. So, we would say, uh, remove a person from the society, remove him. And, you know, never nobody said killing. But we, I thought probably it was meant if you can’t solve the problem by removing the guy, then you could kill him.”

This is the first time a former member of the apartheid regime as high up in the command chain as Vlok has admitted that there was no possible misinterpretation of the phrase that became so infamous in relation to the murder and disappearance of anti-apartheid activists.

Lukhanyo Calata happy with De Klerk's muzzling in US

One of the families of the Cradock Four victims has welcomed the decision by US legal association to cancel an event meant to be addressed by former ...
News
1 year ago

Calata says the evidence presented during the Zietsman inquest and the TRC was strong enough for the NPA to have proceeded with murder prosecutions. At the very least, the foot soldiers who applied for and were denied amnesty should have been prosecuted.

He is “concerned that the SAPS and NPA may still be in the grip of past forces that suppressed the TRC cases” as a reason for their “ongoing paralysis”. Calata and his family have “accepted the necessary and harsh compromises that had to be made to cross the historic bridge from apartheid to democracy” but says “we did so on the basis that there would be a genuine follow-up of those offenders who spurned the process and those who did not qualify for amnesty”.

Should the court grant an order in their favour, Calata and the families of the Cradock Four have given SAPS national commissioner Khehla Sithole and minister of police Bheki Cele 30 days thereafter to see that the Hawks finalise their investigation. They have also asked national director of public prosecutions Shamila Batohi to make a final decision on the prosecution within 60 days of the court order.

It is a last but necessary step in their struggle for justice, and it’s not one that has been taken lightly.

“More than 36 years have passed since the torture and murder of the Cradock Four. We, the family members, can find no peace. The betrayal of Fort Calata, Matthew Goniwe, Sicelo Mhlauli and Sparrow Mkonto, and what they stood for, is almost complete,” Calata told the high court.

This article was originally published on New Frame.

South Africa's last apartheid president, F.W. de Klerk, has withdrawn from a US seminar about minority rights because he did not want to embarrass ...
News
1 year ago

Lawyers for Cradock Four push NPA for a decision on prosecutions

A law firm representing the families of the Cradock Four has demanded that the National Prosecuting Authority decides by no later than July 10 on ...
News
2 years ago

The fight for truth is in Lukhanyo Calata’s blood. When he was three years old, his father was killed by security forces for his activism.
SebenzaLIVE
2 years ago
Next Article