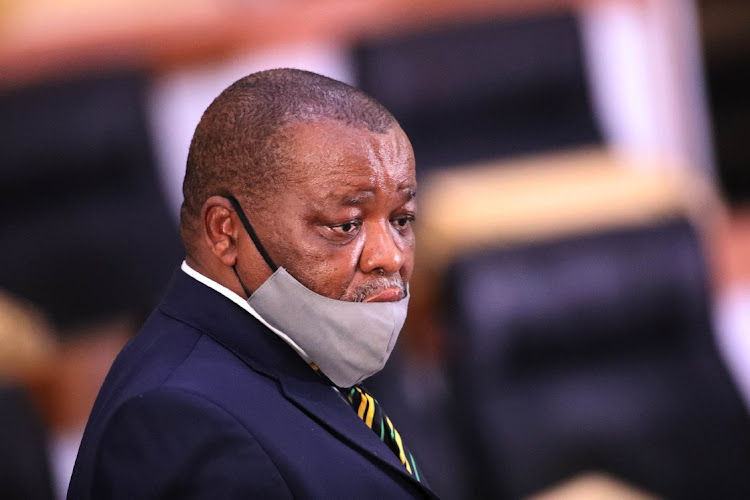 ANC chairperson Gwede Mantashe dismissed calls for health minister Zweli Mkhize to be relinquished of his position until the Special Investigating Unit has completed its probe of the Digital Vibes scandal. File image.
Image: Veli Nhlapo

ANC chairperson Gwede Mantashe says there is no weight to calls for health minister Zweli Mkhize to be relieved of his position until the Special Investigating Unit has finalised its probe of the Digital Vibes scandal.

Mkhize's close associates stand accused of scoring millions of state funds in the R150m contract awarded to Digital Vibes for communication regarding the NHI rollout and, later, extended to the government's response to the Covid-19 pandemic. Preliminary investigations have found that the tender process followed contravened the Public Finance Management Act (PFMA).

Mantashe gave a political lecture on “Revolutionary Morality”, hosted by the ANC, in the Sarah Baartman region of the Eastern Cape on Thursday night.

He said it was expected that Mkhize, who led a critical portfolio, would be vilified.

He used his personal experience as a minister of mineral resources.

“As a mineworker, when I go underground, I can’t avoid dust and its effects when I work underground. That is like that when you are leading a portfolio that is critical and busy like health today ...

“They will insult you, but what they should be asking for is to allow investigation into the allegations.”

The call for Mkhize to be suspended was made by, among others, DA leader John Steenhuisen and AfriForum.

“If we were listen to Steenhuisen every time he says somebody must be fired, we would be left with nobody. Issues must be investigated ... the call which should have been made was that of investigation instead,” said Mantashe.

In the same lecture, Mantashe defended his party's stance on voting with the DA on the public protector matter in parliament, a move which some attendees labelled as counter-revolutionary.

“The issue of the PP has nothing to do with voting with the enemy, it has everything to do with whether the ANC must take processes and drop them midstream when it wants to, that’s it,” he said.

The minister told the delegates that the lecture was taking place under difficult conditions which the party grappled with. Among others was the step-aside resolution which is being challenged by suspended secretary-general Ace Magashule.

He admitted that the party's moral fibre had weakened.

“Not every member of the ANC is a revolutionary. Some are members, activists, cadres, and others revolutionaries.”

Concerned members of the party questioned why certain individuals would not step aside and lead by example.

“The assumption made by conference is that revolutionaries will have a conscience on their own and therefore stepping aside would be a voluntary action, we have seen it many times in the movement,” he said.

Mantashe defended the much-publicised resolution, which he said was necessary for the party to cleanse itself.

“That resolution is lifting the bar for revolutionaries, it is not a tool to target individuals,” he argued

Among others, Mantashe made reference to former president Jacob Zuma and NEC member Tony Yengeni as being revolutionaries after stepping aside.

Responding to a question on whether suspended members and members who have stepped aside could be elected to lead amid investigation charges hanging over their heads, he said it was a question of morality.

“Elected or nominated, it comes from consciousness, the reason people want to be nominated and elected, even when they have stepped aside, is because there are material benefits that go with being elected and that is the debate we should have to say, what do we do,” he added.