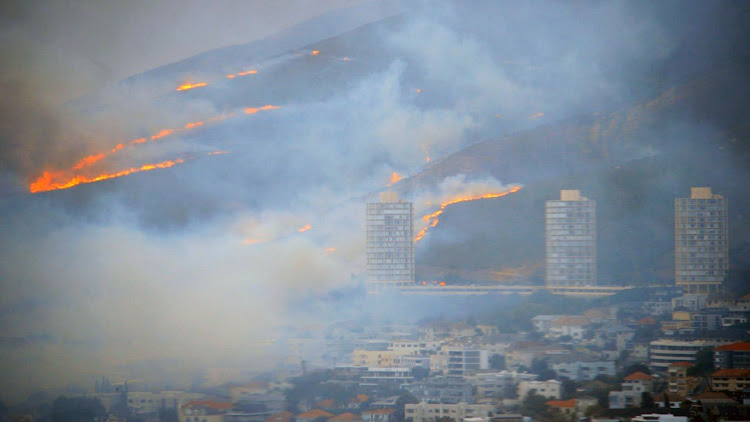 The fire and smoke over Cape Town in an image taken at 7.30am.
Image: Anthony Molyneaux/TimesLIVE

A suspect was taken into custody on Sunday night as the City of Cape Town investigates reports about the original blaze being due to arson and of additional fires being started.

This was disclosed on Monday by mayoral committee member for safety and security JP Smith.

“There is a lot of speculation about additional fires that were started, and whether the original fire was an act of arson. This will form part of investigations, but the city can confirm one suspect in his 30s was taken into custody last night in the vicinity of Devil’s Peak”

He said the suspect “was spotted by a resident who tracked him down with the help of his sons and the family’s dogs. The matter is with the police for investigation and further details will follow as they become available.”

Table Mountain National Park said initial investigations showed a fire suspected to have been left unattended by a vagrant is believed to have been the cause of the original blaze.

The fire continues to rage on Monday and has spread in the direction of Vredehoek.

Smith said all efforts remain focused on active firefighting for the moment, although the fire is hard to reach in places.

“We hope aerial firefighting support can be deployed to douse the flames before they reach the urban edge.

“However, the wind could impact on this deployment.

“For the moment, there are some precautionary evacuations taking place in Vredehoek, but no other evacuations were necessary overnight.”

So from this morning’s shot I took at 4am, the situation right now is this:

It never looks as bad during the day but the wind is PUMPING. Fires very close to the towers in Vredehoek.#tablemountainfire #CapeTownFires #CapeTown pic.twitter.com/GmASAWCCCt

Smith commended firefighters and other teams involved in trying to douse the flames, and thanked the public “for opening their hearts and wallets to the firefighters, but also the students who were evacuated by the University of Cape Town (UCT)”.

On Sunday the blaze engulfed the Rhodes Memorial restaurant and parts of UCT, including the Jagger Library which housed the priceless African Studies collection.

#CapeTownFire #CapeTownFires #CapeTown
Upper Vredehoek, Deer Park & Oranjezicht on high alert. Residents on the edge of the reserve have been evacuated since 4am this morning. pic.twitter.com/1KKYxcDE02

Mostert’s Mill before and after. The historic windmill in Mowbray, Cape Town was built in 1796. It was the oldest surviving windmill in South Africa. Qamata sicel’ imvula. 💔🙏🏾@SANParks #capetown #capetownfires pic.twitter.com/P0Aq9EWXlR

Thank you to the brave fire fighters who have fought the blaze since yesterday 🙏 Praying it is brought under control ASAP. #CapeTownFires pic.twitter.com/r8IpZqb8Ai

The city’s disaster risk management centre said no injuries to civilians have been reported to the disaster operations centre since the fire started.

Two firefighters were hospitalised for burn wounds on Sunday.

The centre said precautionary evacuations are underway in Peppertree Road in Vredehoek after the fire spread towards the area overnight.

The centre said it was aware some residents opted to evacuate in other parts of the suburb due to the smoke hanging over the area.

If asked to evacuate, the centre asked the public to remember the following:

The centre said the SPCA will assist animals that are displaced.

Cape Town residents, corporates, politicians and organisations have rallied to help thousands of UCT students and citizens affected by the fire that ...
News
7 months ago

Firefighters battled into the night to try salvage the University of Cape Town's Jagger Library after a runaway fire quickly spread to the campus on ...
News
7 months ago

Cape Town's City Bowl residents are on high alert on Monday morning as strong winds fan the fires that ignited on Sunday.
News
7 months ago
Next Article