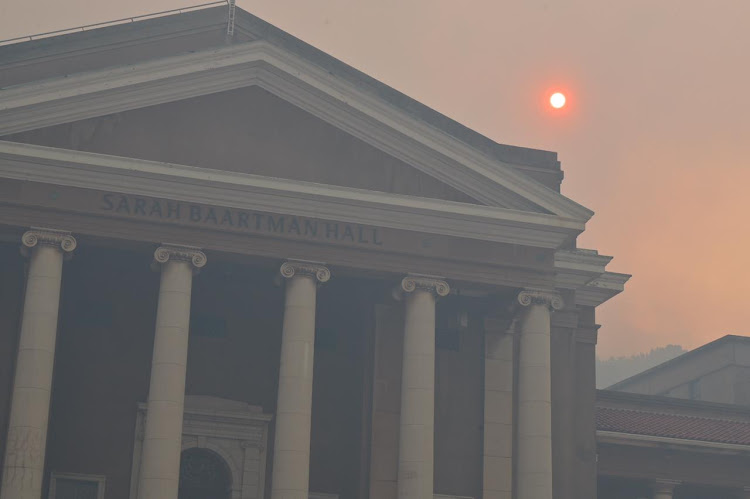 The Sarah Baartman hall at the University of Cape Town is surrounded by a haze of smoke after a fire destroyed parts of the campus on Sunday.
Image: Bruce Sutherland City of Cape Town

In a communique to students and staff, Phakeng hoped that the campus community was “safe and well under these frightening circumstances”.

“In light of the fire affecting the Rondebosch campus of the University of Cape Town (UCT), and the impact this is having on the university’s buildings as well as the evacuation of residences, all academic activities will be suspended tomorrow and on Tuesday.

“No classes, tutorials, laboratory work or tests will take place on Monday, April 19 or Tuesday, April 20. We will assess the situation and provide further updates before midday on Tuesday.”

In the note, she said to ensure student and staff safety, the campus would only be accessible to emergency services.

She would not elaborate on the extent of the damage to the Rondebosch campus.

Phakeng said UCT had made food and emergency accommodation available for students who were evacuated.

Cape Town residents, corporates, politicians and organisations have rallied to help thousands of UCT students and citizens affected by the fire that ...
News
7 months ago

She said trauma counselling was available for affected students and staff. The services can be contacted at the following numbers:

The vice-chancellor said she was grateful to the public who had responded with donations. She also expressed gratitude to all the first responders and firefighters who had battled the blaze.

Donations may be made to:

Please include your donor name if you so wish, as well as the reference for your donation, e.g. Name Surname, #UCTFire.