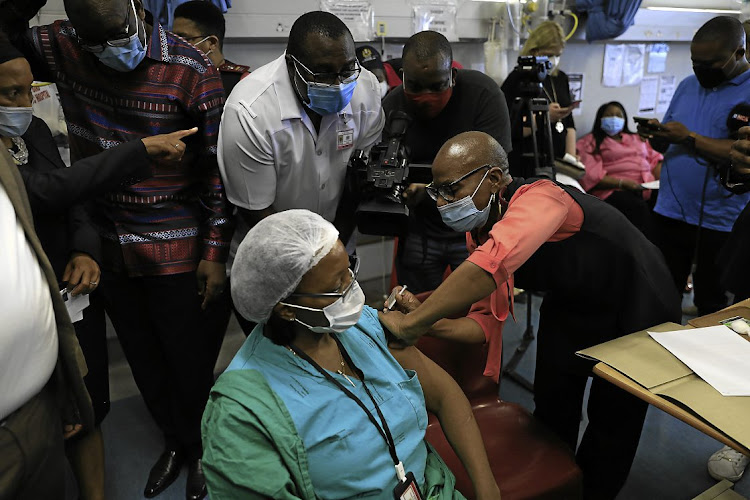 Nearly 300,000 health-care workers have had Covid-19 J&J vaccinations in SA and no very rare blood clots have been detected despite close monitoring
Image: Alon Skuy

No cases of very rare blood clots have been detected in SA health-care workers who have received the J&J Covid-19 vaccine under the Sisonke implementation study, the co-principal investigator Prof Glenda Gray said on Monday night.

By April 12, 289,787 health-care workers had been vaccinated in the first phase of SA’s Covid-19 vaccination programme, according to health minister Zweli Mkhize.

The European Medicines Agency’s safety committee is reviewing four cases of extraordinary and serious blood blots — out of nearly five million vaccinations — which have been seen after the J&J jab in the US.

“At present, no clear causal relationship has been established between these rare events and the Janssen Covid-19 vaccine,” the company said in an e-mailed statement to Reuters.

Botswana is investigating the deaths of two among thousands of people who had been given doses of AstraZeneca's Covid-19 vaccine.
News
9 months ago

Gray said: “We continue to monitor safety, especially with regard to thromboembolism events. To date we have not had any rare events. But, then again, we may need millions vaccinated before we see these rare events.”

These very rare events have also been seen after Pfizer and Moderna vaccinations said Gray, president of the SA Medical Research Council.

The US regulatory authority, the US Food and Drug Administration, alerted its European counterpart last week about the four very rare cases of clotting and low platelets after the J&J vaccine.

Three cases emerged after vaccinations and one person died during a J&J clinical trial from a clotting disorder, the FDA reported.

The Serum Institute of India will still supply the AstraZeneca vaccine to Africa through the Covax vaccine-sharing facility, but the AU will seek ...
News
9 months ago

The European Medicines Agency has also been reviewing cases of rare and potentially lethal clotting disorders which could be linked to the AstraZeneca vaccine, unusually in women under 55 years old.

Nearly 50 million people have got the AZ shot globally — 20 million in the UK, 27 million in India and tens of thousands in Africa — with these rare and severe side effects reported in fewer than 50 people in Europe, nine of whom died.

No causal link has been found to the vaccinations and the European Medicines Agency recommended that countries resume their AZ vaccinations.

The risk of dying of Covid-19 in SA appears to be roughly a thousand times higher than it would be from an extremely rare blood clotting condition, given the numbers.

One to two people per million could be at risk of these clotting disorders and, by Tuesday, more than 53,000 people had died of Covid-19 in SA.