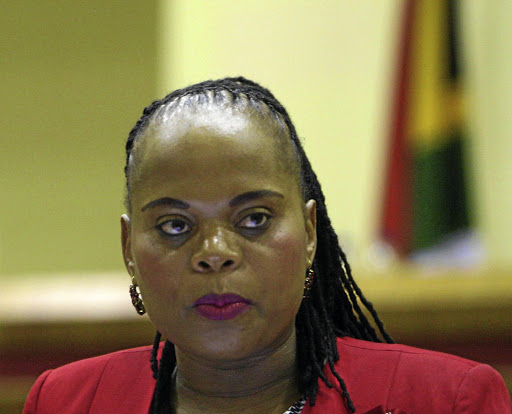 Limpopo health MEC Dr Phophi Ramathuba has withdrawn circulars to introduce a new roster system for health workers in the province in an effort to regulate overtime.
Image: Antonio Muchave

Health workers in Limpopo have won their fight to ensure the new roster system is not implemented in the province.

TimesLIVE has seen the latest circular signed by Ramathuba on Tuesday informing all district executive managers, chief executives officers, head of institutions, head of vertical programmes, heads of human resources and staff that all previous circulars have been suspended indefinitely and withdrawn with immediate effect.

Health unions in Limpopo have suspended their plans to go on strike over a new roster following a meeting health with the provincial department.
News
8 months ago

“People claimed for overtime before they could work their 40 hours,” Ramathuba said.

The Public Servants Association (PSA) provincial manager in Limpopo, John Teffo, said the health workers were against the new system because it was going to affect them negatively in many ways.

He said the decision could have been taken much earlier if the department was willing to listen to workers’ concerns.

Teffo said it was sad that it took threats about striking and picketing for the employer to suspend the roster.

“Employees were put under tremendous pressure and even threatened with dismissal if they were not prepared to comply with impractical rosters that were in contravention of the Occupational Health and Safety Act and the Basic Conditions of Employment Act.

“Employees were even accused of manipulating the overtime system and looting from the employer when they were sacrificing personal and family time to serve the people of Limpopo. The department was unable to fill vacancies owing to budgetary constraints, which resulted in employees also having to cover the work of those who left the department, but instead of being appreciated they were insulted and labelled as thieves,” Teffo said.

Health unions in Limpopo have suspended their plans to go on strike over a new roster following a meeting health with the provincial department.
News
8 months ago

He said workers were not happy about the standardisation of rosters because they were expected to work 40 hours in four days and that was going to disrupt their lives as it would mean they were going to spend less time with their families.

Teffo said most workers in the province were migrant workers who lived far from their families so the current system of seven days in and seven days out works better for them.

The Limpopo department of health has accused thousands of its health workers of milking the state of nearly R2bn in the past two years by allegedly ...
News
8 months ago

Teffo lambasted the department for failing to consult with union leaders and workers and consider their input on how to deal with the challenges.

“The issue here is that what was happening was basically disempowering managers because the circulars were sent to them to implement,” Teffo said.

Ramathuba has, however, disputed this and said the circulars were authored by managers in different positions. She distanced herself from the circulars and said during a meeting with managers, it became evident there was a breakdown in communication when implementation was due to be realised.