SA's attractiveness to global workers has dropped, from ranking 27th six years ago, to 40th two years ago to 45th in 2020.
Image: 123RF/UFUK ZIVANA

SA's attractiveness to global workers has dropped, from ranking 27th six years ago, to 40th two years ago to 45th in 2020.

This is according to a survey of 209,000 people in 190 countries by Boston Consulting Group and The Network, including local partner CareerJunction.

The country remains an attractive destination for other African countries such as Zambia, Angola and Gabon, as well as the Netherlands and UK internationally. 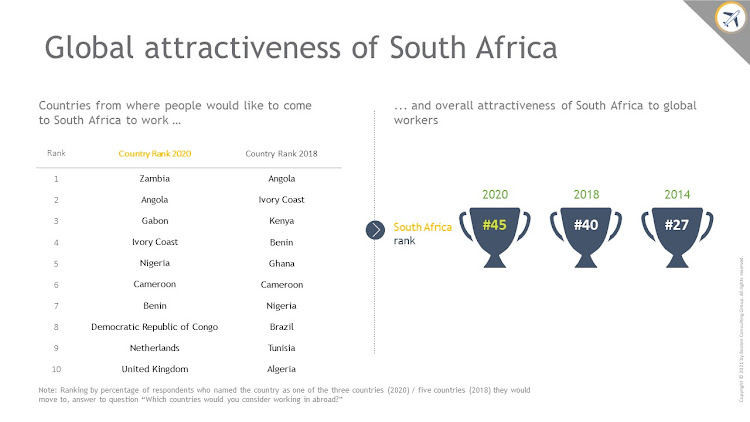 Covid-19 has had an impact, with South Africans far less willing to relocate to a new country than they were in previous years.

Only 59% of South Africans are willing to move to another country for work, which is down from a 72% willingness level in 2018.

“This is in line with the global trend of decreasing mobility — which is likely due to the pandemic, but also because of tighter immigration and less welcoming policies by some of the big destination markets,” said Rudi van Blerk, principal and recruiting director at Boston Consulting Group, Johannesburg.

However, people in some of the most sought-after job roles are still extremely mobile and willing to move and work abroad; these include digitalisation and automation (85%), science & research (78%), law (76%) and IT (74%).

“This could indicate a risk of brain drain in these fields, where employers typically struggle to fill roles,” said Van Blerk. 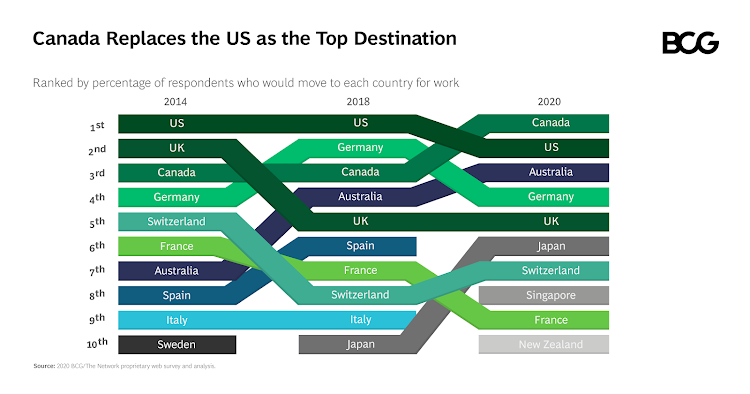 Ranking of the most popular destinations
Image: Global Workforce Study/CareerJunction

The US remains the number one destination where people from SA would move to, but the next most popular destinations have shifted slightly. The UK overtook Australia, and New Zealand and the United Arab Emirates are also more popular targets than 2018, moving up a spot to fifth and sixth respectively.

While there is less willingness now to pull up stakes and move to a foreign country, the survey shows a high level of enthusiasm for virtual mobility — staying in one’s home country while working for a foreign employer.

“Workers in the whole of Africa have shown that they are very open to working remotely for a foreign employer,” Wiebka Cooper, operations manager at CareerJunction, said.

“Remote working has grown significantly as a trend because of the pandemic and offers opportunities for workers to advance their careers even with international companies without needing to relocate.”

In the survey, 73% of South Africans said they are open to work for an international remote employer, compared to the global average of 57%.

The US, UK and Australia are the top destinations where South Africans would look for remote employers — the same as the top target destinations for physical relocation.

“This may have interesting implications: Africa could emerge as a possible virtual talent pool for Western companies — especially for European employers, who don’t need to deal with much time difference when employing African talent remotely,” said Van Blerk. “This could be a good opportunity for SA workers to gain global work experience, build their career, and get better compensation — without having to worry about visas or relocation costs.”

The labour court on Tuesday set aside the Prasa’s termination of employment contracts for two senior executives and a manager, who must be reinstated ...
News
2 months ago

The Limpopo department of health has accused thousands of its health workers of milking the state of nearly R2bn in the past two years by allegedly ...
News
2 months ago
Next Article