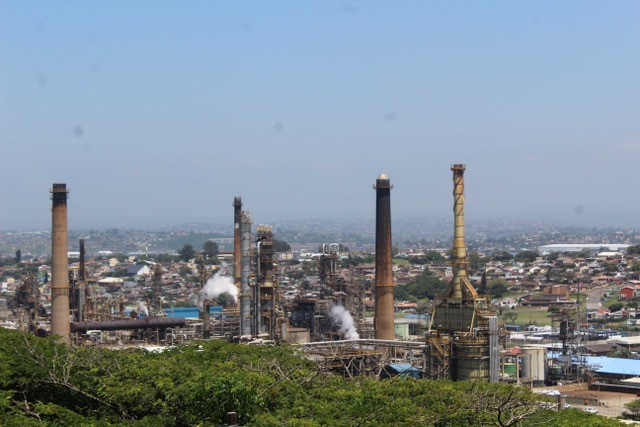 Cleared A probe by the department of environment, forestry and fisheries has cleared Sasol in Secunda from being the source of stench experienced in parts of Gauteng and Mpumalanga two weeks ago.
Image: Tony Carnie

The department of environment, forestry and fisheries (DEFF) said it will continue to probe the source of the stench experienced in parts of Gauteng and Mpumalanga two weeks ago after clearing Sasol's Secunda plant as being the culprit.

In a statement, the department said it will look at other sources that could have contributed to the odour and extend its probe to power plants and waste water works that also emit hydrogen sulphide.

According to the department, the stench was most likely a combination of elevated levels of sulphur dioxide and hydrogen sulphide.

This follows an inspection by the department and the Gert Sibande district municipality in Mpumalanga at the Sasol Secunda plant which was suspected to be the source of the sulphur stench.

The department said during the inspection it was found that the release of sulphur dioxide and hydrogen sulphide from the Sasol plant was within the approved limits of the Atmospheric Emission Licence (AEL) issued to them by the Gert Sibanda municipality on April 23 2019.

“At this stage, the department and Gert Sibanda municipality cannot say definitively what the major source(s) of the air pollution was,” the statement said .

The DEFF and Gert Sibanda municipality suspects that the stench experienced over parts of Gauteng earlier this month may have been the result of the cumulative impact from a number of sources in the surrounding areas.

However, the department said while initial investigations have shown that the sulphur dioxide levels were in compliance with ambient air quality standards across all stations in the week of February 11-17, levels of hydrogen sulphide were found to have been elevated at times during the week in question.

The department also said hydrogen sulphide measurements at the SA Weather Service’s station in Irene, Centurion, showed that hydrogen sulphide exceeded the WHO recommendation on February 12, 15 and until February 17, with the highest peak of 61 ppb on 16 February at 1am).

“The measurements show that there were two typical periods during the day when the levels of hydrogen sulphide were most severe, around 1am and 11am in the mornings. Such peaks are typical of transported air with pollution from high-level sources such as tall stacks.”

According to the department, the WHO recommends that hydrogen sulphide concentrations should not exceed 5.02 parts per billion (ppb) within a 30-minute averaging period to avoid substantial complaints about odour annoyance among the exposed population.

There was also a low-pressure system in the north of the Mozambique Channel that gave rise to a rather uncommon circulation pattern over the region. These conditions created prevailing south-easterly winds that allowed for the transportation of air pollution from the Mpumalanga industrial region into Gauteng, particularly over the cities of Ekurhuleni, Johannesburg and Pretoria.

The department said findings of the probe will be made available once completed.

Petrochemical firm Sasol said on Monday it had decided not to pursue a rights issue of up to $2 billion (R30 billion) after significant progress in ...
News
10 months ago

The environment, forestry and fisheries department (DEFF) said on Wednesday that it would probe elevated levels of sulphur dioxide and hydrogen ...
News
11 months ago
Next Article