WATCH: Driver eludes metro police despite his car tyres being shot at 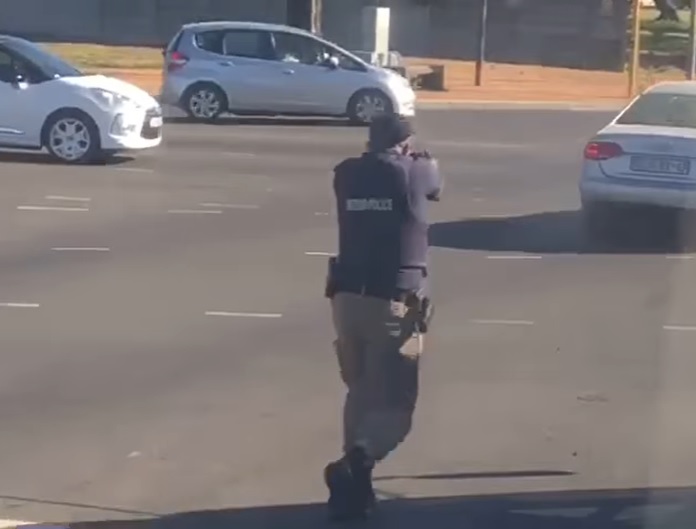 The vehicle, a silver Audi A4, which was stopped by a branded metro police vehicle at Race Course Road in Kenilworth, was shot at several times as the driver refused to come out when instructed to.

Onlookers and pedestrians were left horrified when they witnessed two Cape Town Metro Police officers shooting at the tyres of a vehicle in the middle of a busy intersection after the driver allegedly failed to stop when he was instructed to.

The vehicle, a silver Audi A4, which was stopped by a branded metro police vehicle at Race Course Road in Kenilworth, was shot at several times as the driver refused to come out when instructed to.

Officers are seen circling the vehicle and instructing the driver to hop out. After realising that the driver was reluctant, one of the officers  opened fire, shooting at the tyre on the right side of the vehicle.

A woman recording the video can be heard saying: “He doesn't want to open his door. They are all holding guns now. They are going to shoot him. Why doesn't he just come out and surrender?”

Meanwhile, an officer is seen speaking on the phone moments before several gunshots are heard while the suspect’s vehicle speeds off.

Private investigation group Intelligence Bureau SA posted the following on their Facebook page: "Montague Gardens, Cape Town – Suspect failed to stop for CPT Metro Officials in a fully branded vehicle yesterday, the suspect was blocked in by the officials but the suspect drove into the state vehicle. Officers demanded that the suspect stops immediately after crashing to the state vehicle but refused & drove off, several gun shots were fired by the officers while the suspect fled. A short chase ensued and the suspect drove into a underground parking area (doors were closed). Suspect managed to flee, vehicle recovered. The suspect's apartment was searched & drugs were found."

Executive director for safety and security in the City of Cape Town Richard Bosman said the driver went through a red light and when Metro police officers tried to stop him, he drove into their vehicle, causing damage to it.

“He then sped away but when officers caught up to him and instructed him to exit his car, he refused, they shot at his tyres,” he said.

Bosman said the driver’s decision to evade the officers and avoid arrest, compelled them to take alternative measures to stop him.

“Metropolice officers undergo regular training for such situations, as the video currently being circulated demonstrates the officers on scene took a decision to shoot out the getaway vehicles’ tyres, thus severely limiting his attempts to flee the scene at high speed, which could have resulted in the injury or death of innocent road users,” he said.

A protester will face an attempted murder charge for trying to stab police officers while others looted and torched shops in the Durban city centre ...
News
11 months ago

Reports of violent protests and widespread looting in the Durban city centre on Monday are untrue.
News
11 months ago
Next Article