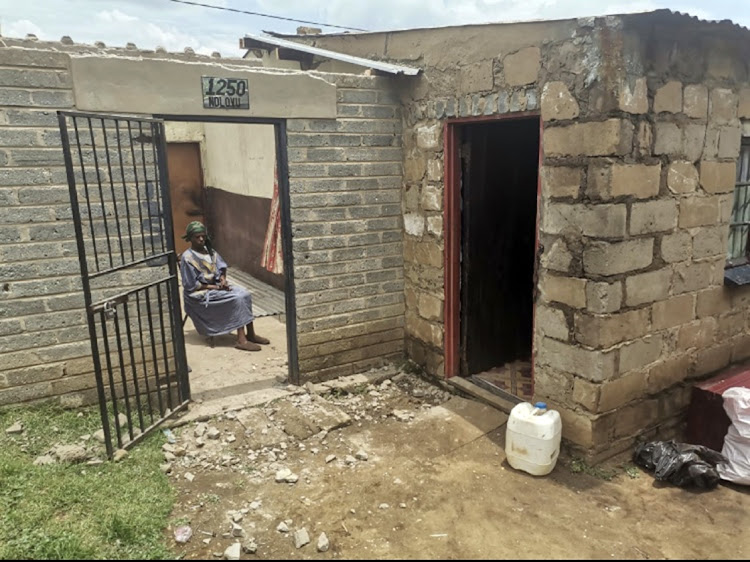 91-year-old Elizabeth Ndlovu, who was on Monday evicted from her RDP house with her children and grandchildren.
Image: Mandla Khoza

Human settlements, water and sanitation minister Lindiwe Sisulu has directed her department to launch a full investigation into the eviction of 91-year-old Elizabeth Ndlovu from an RDP house in Morgenzon, Mpumalanga.

This came after Sowetan ran a story on Thursday about Ndlovu’s eviction that was carried out by court clerk Buyi Abigail Mfusi.

Ndlovu had purchased the RDP house from Mfusi, who later sold the same house to the acting manager of the Lekwa local municipality, Mduduzi Makhanye.

Makhanye is also ANC branch secretary in Ward 14 in the area. Ndlovu lived in the house with her four daughters and their five children.

Mfusi said she qualified for the RDP house while she was still unemployed and later sold it to Ndlovu for R14,000 although the house was never transferred into Ndlovu's name.

Mfusi said in 2019 she received a summons for R38,000 in unpaid rates from the municipality.

Mfusi said she approached Ndlovu to settle the debt so they could get a title deed but that Ndlovu could not afford this.

Mfusi then sold the house to Makhanye who paid her a total of R30,000 .

Sisulu said the report by Sowetan about Ndlovu’s eviction was disturbing .

“The minister of human settlements, water and sanitation Lindiwe Sisulu has directed her department to investigate and find a solution to the alleged eviction of an elderly person in Standerton, Mpumalanga province.

"This after Sowetan ran a disturbing story of 91-year-old Gogo Ndlovu who has been left homeless as her house was sold to someone else. The department takes the allegations as reported in the media very seriously.

"What we have read in the newspaper that our houses are sold for nothing is very disturbing. We cannot allow this to happen during our watch, fully subsidised houses are for distribution to people and that includes senior citizens,” said a statement from Sisulu’s office.

Sisulu said her department was going to work with the provincial government and also the Lekwa local municipality to find a permanent solution for Ndlovu.

A 91-year-old pensioner has been evicted from a house she has lived in for more than a decade after it was sold for a second time to a senior ANC ...
News
1 year ago

In April last year, Makhanye approached the Ndlovu family asking them to pay him monthly rent of R500 as he was the owner of the property.

Two weeks ago, Makhanye said he asked Mfusi to make a plan for him to move into his house.

Ndlovu, who has been allowed to stay in a one-room house next to the disputed RDP house for three weeks, said her eviction was traumatic.

“My son bought this house for me from that lady [Mfusi] and we were living safe in our own house after staying on the farms for years until my husband died. Now I don’t know where to go because I even built another room next to the RDP with my pension money ... but now we have to leave, God knows to where,” said Ndlovu.

Mfusi told Sowetan she had to sell the house as the municipality had taken legal steps against her, and was trying to attach her property for the unpaid rates.

“Yes, I might have made a mistake by not transferring the ownership from the start when I sold them the house,” she said.

Makhanye denied that he was behind the eviction of the elderly woman and her children. He said Mfusi was a family friend and when he learnt that she wanted to sell the house he took the opportunity.

"We went to check in the municipality and found out that it was owing R38,000 in rates and she asked for amnesty and they made her pay R19,000. I gave her that money and also gave her R10,000 on top. I asked her to make the Ndlovus aware that I want to move in and demolish the house and build whatever structure of mine," he said.

"I spoke to Mfusi this year that I wanted to move in and on January 18 Mfusi told me I must come and occupy my house,” said Makhanye.

The South African National Civic Organisation (Sanco) accused Mfusi and Makhanye of conniving to make a profit and drive an old person out of the house during lockdown.

Sanco chairperson Sifiso Zacarias said Ndlovu was being chased out of a home by people working for the  government, which initially built such homes for the poor. “This is saddening. How do you evict an old woman and nine other people who don’t have another place to stay?”

Spokesperson for the department of human settlements in Mpumalanga, Freddy Ngobe, said the department did not have jurisdiction to directly intervene, and the Ndlovus were advised to report the matter to law enforcement agencies for investigation.

"Once again, the department condemns any acts of fraud, evictions and victimisation of the elderly during this difficult time of the Covid-19 pandemic,” said Ngobe.

However, the Lekwa local municipality told Sowetan that had Mfusi transferred the house to Ndlovu after the sale the municipal rates were not going to be that much.

“What we can see here is that the house was owing R33,000 in rates and we discounted them and Makhanye paid an amount  of R19,000 last year," said the municipality's spokesperson Thobeka Mtshiselwa. "However, when it comes to the issue of eviction or Makhanye going to that house, as the municipality we would like to distance ourselves from that. Makhanye was acting on his own, not on behalf of the municipality. The municipality is also going to have Makhanye explain his actions to the municipality.”