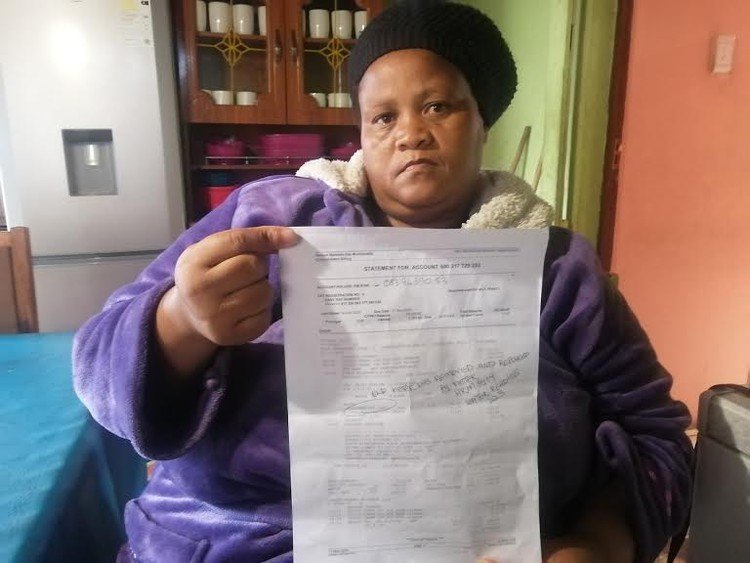 Nolubabalo Koni says her electricity supply has been blocked because of an unpaid water bill of more than R63,000 which she disputes.
Image: Mkhuseli Sizani / GroundUp

About 500 households in Missionvale in Nelson Mandela Bay have had their electricity supply blocked because the municipality says their water bills have not been paid.

But the families said they have never run up bills of up to R63,000.

Resident Nolubabalo Koni told GroundUp: “On November 10 I went to the shop to buy electricity but I couldn’t get it because my electricity account was blocked. The following day my husband went to city treasury. He was told he owes the municipality more than R63,300 for water and he must pay R6,000 to unblock our electricity account.

“They said according to their records, our water meter was replaced with a new one. I told them that never happened, but they said the meter reader’s report says it did. We also discovered that on our account instead of writing ward 31 they wrote ward 37.”

Koni said since they occupied their RDP house, their water account has been giving them problems.

“My house was built in 2013. In 2014 the water meter was installed, but there was no water and we made use of communal taps. The same year I received three water meter accounts claiming we owe R7,200. We ignored the letters because we had no water in our homes.

“In November 2018 we got water for the first time in our homes, but my electricity meter was quickly blocked. I went back and forth to Cleary Park customer care service and the councillor’s office, but we couldn’t get help. We were told to pay R1,000 to unblock our electricity account,” she said.

The KwaZulu-Natal Department of Education is set to pay R30 million to the eThekwini municipality to bail out schools with high municipal bills.
News
1 year ago

She said after complaints by residents at the ward councillor’s office their debts were written off.

Ward 31 councillor Luyolo Nombola (ANC) confirmed that debts for some 2,000 households which had no water supply had been written off.

However, Koni said the problems continued. She said the township had not received any water accounts in 2019, but the municipality blocked their electricity accounts, claiming the water bills were unpaid.

Accounts not sent during lockdown

DA councillor Teslin Booysen said when water was installed in the township there were no meter readers and the municipality had estimated water usage.

“Most of those accounts were around R7,200 but with an option to lodge a complaint at customer care. Those who could not pay their accounts were advised to apply for assistance.”

“Since the lockdown started there were no water accounts issued, but people were expected to pay the average amount they used to pay before the lockdown.”

Booysen said on October 1 the municipality introduced credit controls and account holders were given 15 days to settle water accounts or have their electricity boxes blocked.

“However, budget and treasury are dealing with those problems. I constantly submit reports on behalf of those who are affected, including the affected family.”

The Nelson Mandela Bay municipality says resident Lubabalo Vesele owes R68,000 for water. But Vesele says he has been complaining about a water leak ...
News
1 year ago

Outa has condemned a three-day meeting held by the cash-strapped Govan Mbeki municipality at a spa resort in Carolina, some 140km from  the seat of ...
News
2 years ago
Next Article