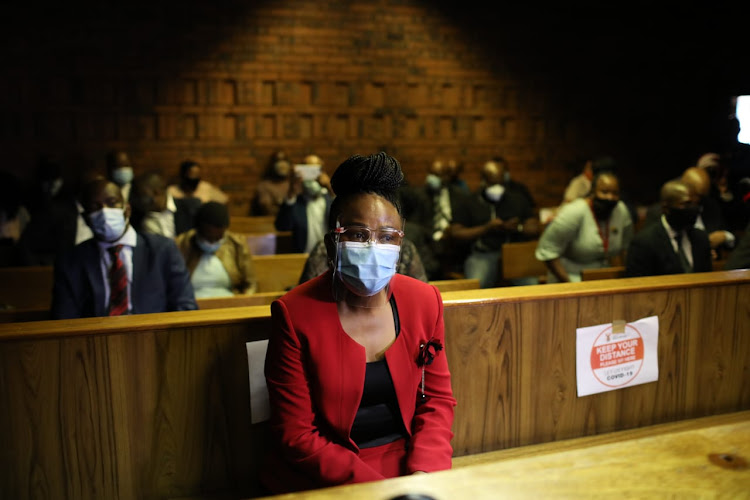 Public Protector Busisiwe Mkhwebane is pictured ahead of court proceedings, 21 January 2021, at the Pretoria regional court, where she made a first appearance in connection with charges of perjury.
Image: Alaister Russell

Public protector Busisiwe Mkhwebane's perjury case has been postponed to March after a brief appearance in the Pretoria Magistrates court on Thursday.

Mkhwebane who is currently on a sabbatical leave until March has been formally charged for allegedly lying under oath on three occasions after disposing affidavits which contained apparent untruths.

Magistrates Adrian Bekker postponed the case to March 25 to allow for the management and resolution of pre-trial matters.

The National Prosecuting Authority (NPA) in December charged Mkhwebane with perjury after the findings of the Constitutional Court in her case against the Reserve Bank.

NPA spokesperson Sipho Ngwema said: "The public protector has been charged for lying under oath three times, the first one is that she said she only had one meeting with President (Jacob) Zuma whereas the investigation proved that she had two meetings with President Zuma."

Ngwema said the alleged second lie was that Mkhwebane had claimed she only discussed a preliminary report with Zuma while she had allegedly also discussed her final report and had also not been truthful about the purpose of her meeting with the former head of state.

Head of Accountability Now, Paul Hoffman, in 2019 laid criminal charges against Mkhwebane after the ConCourt judgment. The court has also found that Mkhwebane may have been biased in her investigation and did not understand her constitutional duty to be impartial.

The Constitutional Court found that Mkhwebane had “put forward a number of falsehoods” in her 2017 Absa-Bankorp, in which she found that Absa must repay R1.1bn to the Reserve Bank for the “lifeboat” lending agreement between the Bank and the then Bankorp, which was later taken over by Absa.

National Assembly speaker Thandi Modise granted public protector Busisiwe Mkhwebane's sabbatical leave on the condition she will avail herself to the ...
News
1 year ago
Next Article