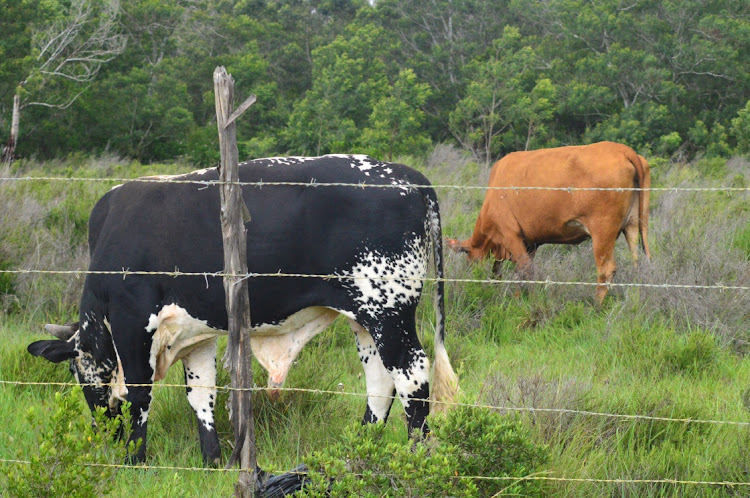 Cows in the Qumbu area will be vaccinated against rabies one reportedly attacked a woman, leading to her death.
Image: Randell Roskruge

Cows and other domestic animals in the Qumbu region of the Eastern Cape will be vaccinated against rabies from Wednesday after a cow bit the leg of a schoolteacher who subsequently died.

The provincial department of rural development and agrarian reform is set to meet traditional leaders in the area.

The department said it received a report from its “officials based in the OR Tambo district, [saying] a cow with a newly born calf attacked and bit a woman at Mdeni A/A in Qumbu”.

“Veterinary scientists from the department suspected the animal's behaviour to be induced by rabies. A team of veterinary specialists was sent to conduct an assessment of the animal and the finding was that the animal did not exhibit clinical symptoms of rabies.”

A truck driver has died in what paramedics described as a freak accident in Pinetown, west of Durban, on Monday night.
News
1 year ago

A meeting was held between the owner of the cow, veterinary scientists and traditional leaders in the village and it was decided the animal be euthanised.

“The owner later reneged on the agreement,” said the department, which wanted the cow to be taken to Dohne Research Station for further examination.

MEC Nomakhosazana Meth conveyed her condolences to the woman’s family.

Veterinary specialist Dr Chris Jansen van Vuuren told TimesLIVE it was important for rabies to be completely ruled out, considering the attack occurred in an area possibly inhabited by foxes or other wildlife which could transmit rabies.

He stressed that cows with calves tended to be very territorial, especially if they were  Brahman cattle, and would inflict harm if they sensed danger.

“They could even trample you to death,” he said.

He said it could have been motherly instinct that kicked in or rabies, but this required further scrutiny.

In cows, rabies led to neurological disorders which at times showed themselves in the form of hydrophobia. This would cause the cow to be thirsty but looking at water would scare them.

“They would also hit objects with their heads, which is very unusual behaviour. This is transmittable to humans and should therefore not be written off but be thoroughly investigated.”

Jansen van Vuuren said it was important for the cow to be kept in a proper holding facility where its temperature could be taken and tongue observed to check if it was salivating.

“Also worth noting would be whether it was still mothering its calf during this time. You cannot make a call on a distant evaluation.”

A 41-year-old man was killed in a freak accident at the Atlas/R21 split in Kempton Park on Wednesday afternoon, ER24 paramedics said.
News
2 years ago

He said it was possible the cow could have retained the placenta after the birth of the calf, causing it to be agitated. Whether the cow was part of a herd also played an important role in its reaction to possible danger.

“If she is a loner, her reaction would have been severe to protect her calf,” said Jansen van Vuuren.