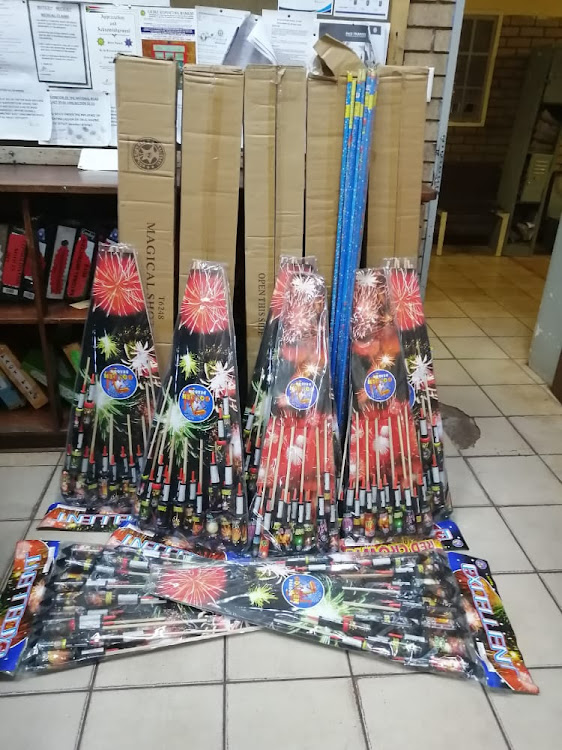 A 33-year-old male shop owner was charged for selling fireworks without a licence. Police confiscated fireworks with an estimated value of R9,000.
Image: SAPS

New Year's Eve in Kathu, Northern Cape, was an uneventful one — especially with the new lockdown regulations.

The highlight of the evening was the arrest of a 33-year-old male shop owner who was charged with selling fireworks without a licence.

His R9k loot was confiscated by Sgt Ben Eiman and Constable Beatrice Canchibatho.

Just the day before, the duo arrested a 66-year-old male driver. The man was allegedly driving drunk with an assortment of dangerous weapons in his vehicle.

The cops also recovered a stolen bicycle and went on an expedition visiting tuck-shops to make sure they closed in time for the new level 3 restrictions.

It was all in a day (or two's) work as the pair was commended by Kathu station commander, Lt-Col Sandra Boshof, for their “relentless efforts in combating and preventing crime”.

She said police would adopt a zero tolerance approach when it come to compliance of the regulations especially adherence to the curfew and the transportation and consumption of alcohol and illegal gatherings.

Close to 18,000 new Covid-19 cases have been recorded over the past 24 hours, setting a new record for the number of infections in a day.
News
1 year ago