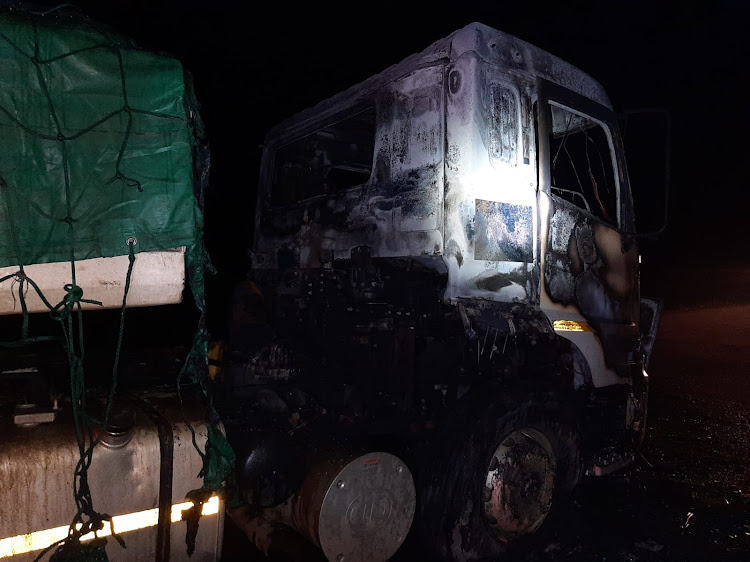 Shots were fired at truck drivers and their vehicles were set alight in Free State.
Image: SAPS

Five trucks were torched on the R59 road between Parys and Sasolburg on Saturday night, police said.

Brig Motantsi Makhele said police were alerted at about 8.50pm.

"It is alleged by the drivers that one truck was petrol-bombed and forced to stop. Shots were fired at other trucks, forcing them to stop.

"The drivers fled into a nearby field and four trucks were then set alight."

Police said the motive for the attack is under investigation and no arrests have been effected yet.

The truck drivers were treated for shock at Parys District Hospital.

This comes after numerous attacks on truckers on the highway between Gauteng and KwaZulu-Natal on Thursday night.

The Sunday Times reported that at an estimated 30 trucks had come under attack last week.

The motive for the attacks is unclear at this stage.

Meanwhile, a march on Transnet's Durban harbour offices is planned for Monday by the National Truck Foundation (NTF), which is demanding foreign drivers be stopped from collecting cargo on the grounds they pose a "security threat" to the country.

A crater spanning several metres in the middle of the road is the fallout of a traffic accident in which a truck transporting explosives caught ...
News
1 year ago