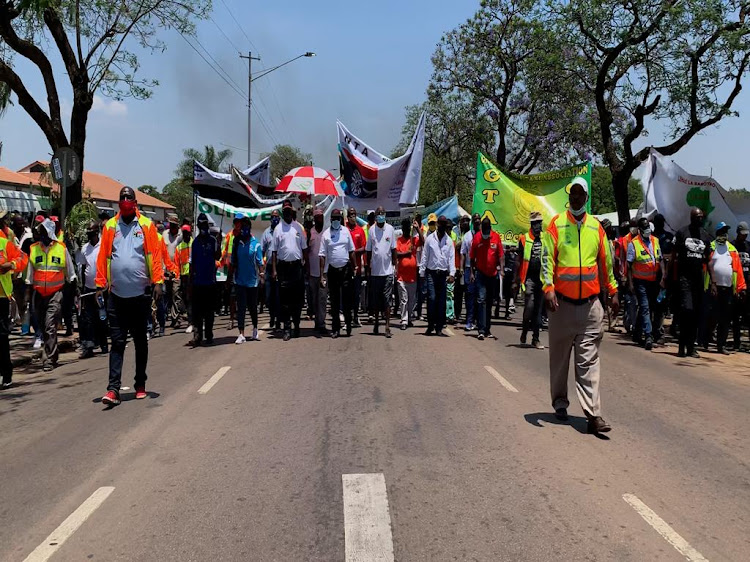 National Taxi Alliance members marched through the streets of Pretoria to voice their grievances on Wednesday November 18 2020.
Image: Zama Luthuli

The National Taxi Alliance (NTA) promised “action” should the government not respond to its grievances about Covid-19 relief funds – after an at times, violent strike that caused traffic jams and left commuters stranded in Pretoria on Wednesday.

Members of the NTA marched to the Union Buildings and transport department in the capital to deliver a memorandum addressed to transport minister Fikile Mbalula and President Cyril Ramaphosa.

Chief among the demands was for the government to fast-track paying a relief package worth more than R1bn that was allocated to the industry earlier in the year by Mbalula.

During the course of the day, a city bus, driven by a woman, was allegedly hijacked in Orchards, north of Pretoria, and passengers forced out. City spokesperson Selby Bokaba said some commuters were intimidated and assaulted.

NTA spokesperson Theo Malele said marchers were told not to get involved in violent activities. “We have called for a peaceful march,” he said earlier.

Dramatic footage was shared on social media of a truck, carrying liquor, ramming a vehicle allegedly occupied by protesters that had blocked its path.

Truck drivers are getting fed up now!!! 🙆‍♂️ pic.twitter.com/4p4KlYqrN9

Reading out the demands, Alpheus Mlalazi said no drivers or taxi owners had received any of the earmarked relief package funds. They demanded a response to their grievances within 14 days.

The CBD came to a standstill as the marchers headed to the department of transport. Some walked, some travelled in minibus taxis blocking off streets, others sang, holding placards.

"The minister ambushed us in one of the meetings by announcing stringent preconditions taxi operators must meet in order to access the relief fund," said Mlalazi, while reading out the memorandum.

"We are struggling as taxi men because the president said there was a taxi relief fund …. We are here to tell the president that we haven't gotten that money. We don't see the reasons for the delay. We ask the president to call Mbalula to order. We can't allow him to suppress our rights. We are not prepared to be taken for a ride by Mbalula," he added.

Masitsa said the recent national taxi lekgotla was not representative of the taxi industry.

"There was a national lekgotla, let the president not be deceived because the lekgotla was not representative of the taxi industry, it was a meeting between the minister and his friends, period. All the decisions taken there as far as the NTA is concerned, they are baseless and without foundation," he said.

Mlalazi said the NTA wanted the president to direct Mbalula and his department to call for an inclusive and non-partisan taxi indaba to chart a way forward on a united, regulated, formalised and professional taxi industry.

Meanwhile, it remained unclear if the truck filmed ramming a sedan was almost looted by marchers or criminal elements taking advantage of the situation.

An eyewitness, who asked to remain anonymous for fear of victimisation, said a Toyota Corolla with clear taxi association markings tried to stop the truck. The vehicle’s occupants then gathered around the truck at the intersection of Thabo Sehume and Struben streets.

“Within a few minutes, I saw more people around the truck trying to loot it. I’m not sure if the people were just people passing by who tried to take advantage of the situation or if they were part of the protest,” he said.

The city suspended its bus services during the afternoon “due to the strike action by members affiliated to the National Taxi Alliance (NTA) which was characterised by violence, intimidation and threats directed towards bus drivers and commuters”.