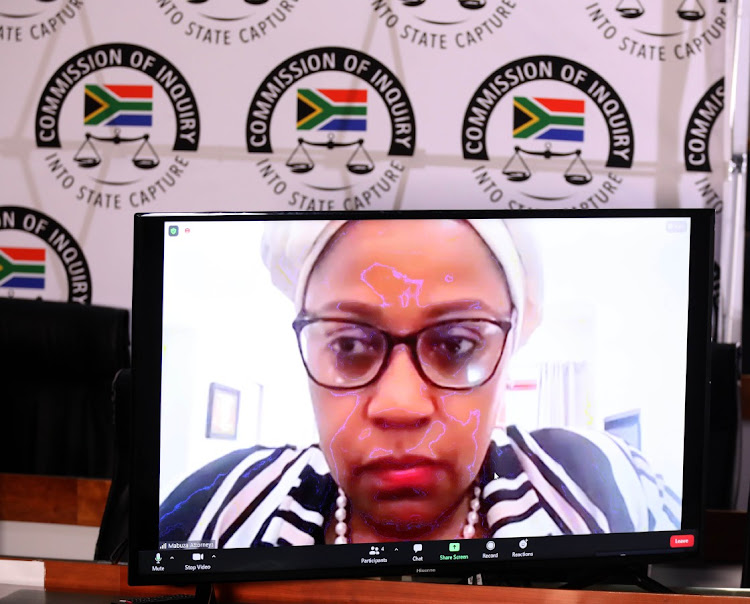 Former SAA board chair Dudu Myeni fears the National Prosecuting Authority (NPA) is after her for transgressing the Companies Act as a director by interfering in management decisions at the airline.

At the state capture commission of inquiry yesterday, Myeni repeatedly expressed fear of incriminating herself in a potential criminal case she expects to face in relation to her role at the helm of SAA.

The North Gauteng High Court in Pretoria in May declared Myeni a delinquent director after she was found to be dishonest, reckless and grossly negligent in her conduct in some of the airline’s disastrous years, which left it on the brink of collapse.

She was also found to have breached her fiduciary duty to SAA when she intervened in operations that prevented a business transaction with Emirates Airline from taking place that would have brought SAA a minimum of $100m a year.

Yesterday, Myeni and her legal advisers claimed the multidisciplinary law enforcement units comprising the NPA's  investigating unit, the Hawks, special investigating unit and others were about to pounce on her.

This formed the basis of Myeni’s refusal to answer questions, especially on SAA, at the commission. She repeatedly responded: “May I not answer the question in case I incriminate myself.

“Chairperson, I came before this commission in terms of its rules. I filed the affidavit indicating that while I respect the commission and wish to assist the commission, I’m in a very difficult position because before me there is a court directing that I be charged in this regard.

“I think I am anxious that I’m compelled to forego my constitutional right not to incriminate myself. So in my affidavit, I’ve referred the commission to the documents relevant to the issues that were raised by the commission.

"I did that, chairperson, because I highly respect this commission, I always act responsibly and I am willing and committed to present myself to this commission so that we deal once and for all with everything that has been said and all the false accusations and insinuations about me that have been made in my absence.”

In her high court judgment, judge Ronel Tolmay said Myeni was “a director gone rogue” who “did not have the slightest consideration for her fiduciary duty to SAA”.

“Her actions caused SAA and the country immense harm and it was of the utmost importance that she be brought before a court to answer for her deeds,” Tolmay said.

Sowetan understands that SAA – which squandered public funds and had to receive multiple bailouts from the state – is indeed under investigation but could not establish whether there was any imminent arrest of Myeni.

Her lawyer Thabani Masuku yesterday told the commission that their legal advice to Myeni was given against the backdrop of her imminent arrest as reported in Sunday World newspaper but also the court’s decision to refer the matter to the NPA.

The high court, in the case brought by the Organisation Undoing Tax Abuse (Outa) and the South African Pilots Association against Myeni,  found that there was sufficient grounds for the NPA to consider the evidence presented during the trial and to investigate the circumstances surrounding the  Emirates deal and the Airbus swap transaction, if they find it appropriate. The court said the investigation, if undertaken, should include the other board members who were implied to have been involved.

The NPA's investigative directorate, SIU and the Hawks did not want to say outright whether they would take such action against Myeni.

“We are investigating SAA. When we find criminality we refer that to the Hawks,” said an insider.

Another law enforcement official said when they are about to pounce, the tradition is to inform the suspect in order to organise for them to hand themselves over.

NPA spokesperson Sipho Ngwema refused to comment on the argument advanced by Myeni before the commission. “We’ve got nothing to do with what is happening in the commission. There are lawyers there, they can deal with it,” Ngwema said.

Myeni was so hell-bent on not answering any questions that she did not even want to say whether she understood what fraud was.

Criminal law expert Dr Llewellyn Curlewis said that Myeni was well within her constitutional rights to invoke her silence. Curlewis said the threat of criminal charges was real as it was pronounced by a high court.

“The problem, however, is obviously the purpose of the commission to get as much information as possible in order to get to the gist of it, in other words to get to the finality of the matter by getting to the truth,”  Curlewis said.

“Now if everyone invokes their right to remain silent then obviously chances are slim that the commission would be able to even get all that information properly for the commission to consider as evidence. That being said, remember, not all witnesses that testify stand the risk to being prosecuted.”

Businesswoman Ndileka Nobaxa scored a lucrative contract from SAA Technical, and then paid R800,000 into the account of Zano Spark, a Forex Trading ...
News
1 year ago